Frampton Erupts: I Want To Flatten Jackson, Lay Him Out Cold!

CARL FRAMPTON will turn nasty the moment he looks across the ring and sees Luke Jackson in the opposite corner.

He gets the chance to silence Jackson (16-0) when he defends his interim WBO featherweight crown against the Australian challenger at Belfast’s Windsor Park on Saturday August 18.

Jackson has angered Frampton suggesting he’s over the hill as a boxer and claimed he looks overweight in training. 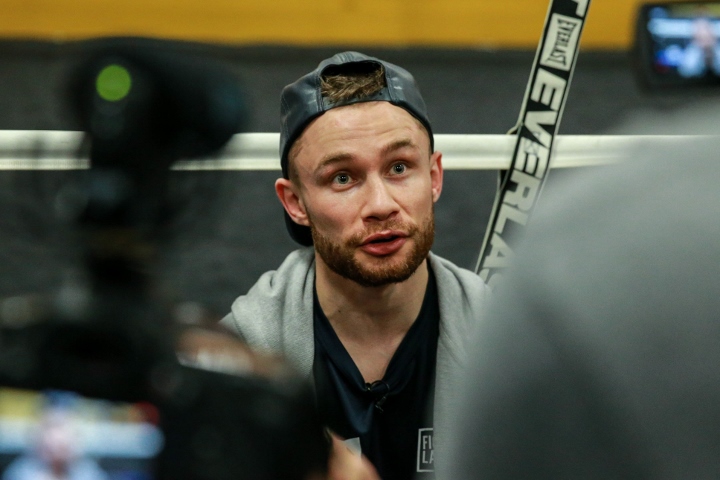 That means an exciting night for 20,000 fans and viewers watching on BT Sport, but bad news for Jackson.

Frampton (25-1) said:  “He has annoyed me a little bit, but not enough to take my mind off the game and be overly aggressive.

“He has annoyed me enough to wanna flatten him and put him out cold, properly.

“I haven’t knocked anybody out in a long time, but Luke Jackson is a guy who is going to get knocked out.”

Jackson, 33, has also teased Frampton over his amateur career claiming his experience in the London 2012 Olympics and other major championships betters the Belfast man’s achievements in the unpaid code.

Frampton added: “He keeps talking about his amateur career. Who give a f**k what he did as an amateur? He isn’t Vasyl Lomachenko.

“Let’s not forget he is based in Australia. If Australia sent a ten man team to box an international against Ireland they would get beat 10-0, and that’s a fact.

“His amateur career wasn’t even that good when you look at it.

“The reason Australia can send almost a full team to the Olympics is because they box Fiji, Samoa and Tonga.

“It is a lot easier qualifying process compared to what Ireland and GB have to go through for the Olympics.

“This is professional boxing and it’s almost a different sport. He will see on the night.”

i like frampton, unless the quotes have been taken out of context, he seems rattled here. action jackson has got under his skin.

[I]“The reason Australia can send almost a full team to the Olympics is because they box Fiji, Samoa and Tonga. “It is a lot easier qualifying process compared to what Ireland and GB have to go through for the Olympics.…

Carl, you're rattled. I remember Framps used to be a fairly happy guy but I've not felt that in a long time now and it shows in his tentative performances. He seems to have underlying issues which have become more…