Two time boxing world champion Denkaosan Kaovichit could end up losing a finger after being attacked outside his home in Sala Thammasop on the outskirts of Bangkok.

The former WBA flyweight champion and interim WBA super flyweight champion had been involved in a long running disagreement with his neighbours over a dog. Reports in Thai Rath and Manager offer slightly conflicting reports of how the dispute involved but at 6pm on Saturday night it escalated dramatically.

Denkaosan, who retired from boxing with a 63-7-1 record, returned home after working as a trainer at the nearby Galaxy Gym. He became involved in an argument with two female neighbours who attacked him with swords. 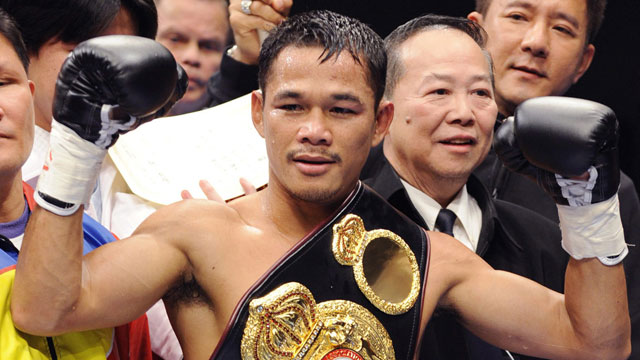 According to Denkaosan he did not want to defend himself because some of the assailants were female so he ran away. Unfortunately for the former champion he lost his footing and was set upon with the swords, suffering serious injuries to his hand and head.

One of the fingers on Denkaosan's left hand was partially severed and doctors at the Kasemrad Hospital are trying to re-attach it.

This article originally appeared on The Fight Nation.

[QUOTE=BrometheusBob.;17145367]I think he didn't wanna admit that he was too scared to fight them. Two people came at him with swords, no way he wanted a piece of that action.[/QUOTE] Exactly...anyone talking like they're gonna throw hands with 2 attackers…

WTF crazy *****es with swords?ah its Bangkok nothing new guys ,Lets forget about it .

[QUOTE=Teetotaler;17145813]What are the freaking odds. You join and within the same month somebody gets attacked with a sword. Lol Im not saying you did it but.....[/QUOTE] LOL, it's true i've got a close eye on this guy.

[QUOTE=Shaolin Sword;17145369]Hopefully it wasn't a Shaolin Sword :p[/QUOTE] What are the freaking odds. You join and within the same month somebody gets attacked with a sword. Lol Im not saying you did it but.....