Forgoing The Luck of The Draw, For Good

Every now and then, the tinkering mood just hits.

I’m feeling bored, introspective, forward-thinking… whatever, and I begin pondering ways in which I can make the things I truly enjoy even better.

For a lot of guys, that probably means loading up the pickup truck and heading to the nearest Lowe’s or Home Depot location. But to guys like me, who are far more capable with a keyboard than a screwdriver, it becomes far more a cerebral pursuit than a hands-on one.

And in this case, the thing I’m angling to improve is boxing.

Now, some things about our sport are simply unchangeable through the actions of one middle-aged writer on the Southwest Florida coast. Big fights are still going to be constructed by executives in corner offices as much as they’re made based on logic. And broadcasters will still lean toward car-crash titillation far more than sublime brilliance when it comes to where they point their cameras.

Examples of those two points are clear enough without naming names.

Anyway, a new idea popped in my head over the weekend as I watched a 30-year-old replay – for probably the 30 millionth time – of the second fight between my all-time favorite, Tommy Hearns, and his career’s most signature win-loss nemesis, Ray Leonard.

It was a lousy decision if you ask me, and I was chagrined to realize that the annoyance I felt upon hearing it hadn’t changed on viewing No. 30,000,000 any more than it had from Nos. 1 to 29,999,999. But that’s not why it struck me this time. In fact, the fight itself was merely a catalyst because of its so-called “draw” result, not because any other specifics about it link to my subsequent brainstorm.

Instead, while hearing tired phrases like “you’ve got to take the fight to a champion” and “you’ve got to do more than a champion to win his title” ring in my ears, I came up with something else entirely.

How about, in cases where championship fights end in draws, the titles are declared vacant?

My logic is simple. Once a champion unwraps the title belt from his waist or pulls it down off of his shoulder before a fight, he’s no longer in possession of that trinket. It’s up for grabs. So the two fighters subsequently competing for it in the ring should be viewed as equals, not in a pecking order based on their past results or accomplishments. 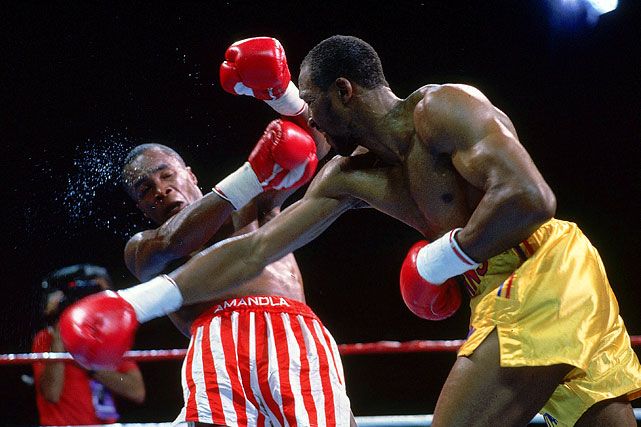 If the Super Bowl is tied after four quarters this February, the refs won’t hand the Lombardi Trophy back to the New England Patriots thanks to their incumbent status. Nor, in play for hockey’s Stanley Cup – for the eight people out there that watch hockey – will the St. Louis Blues be again awarded the silver chalice at the end a tied Game 7, simply because they earned the championship last June.

Instead, those champions would have to play to maintain their kingdoms.

But even in the absence of a suitably, similar OT mechanism in boxing – unless we’re resurrecting the old 13th-round idea from the ESPN tournaments of the 1980s, that is – it’s still a simple fix.

If assigned judges can’t come up with a verdict sufficient to declare one of the fighters as superior, then they should continue to be viewed as equals afterward. Automatically make them contenders 1 and 1a for the title and order an immediate rematch before either moves on. And if one balks at the idea of another get-together, bump him out of the queue and promote contender No. 2 for a shot.

Still, if the status quo isn’t quite ready for vacating titles in the event of draws, I get it.

And if that’s indeed the case, then the only remaining solution is to discard the draw as an option.

Toward that end, have an additional judge in the building scoring the fight in real time along with the official trio. And if the verdict is locked up after the tallying of the first three scores, go automatically to No. 4 to break the tie. Or if folks are feeling particularly progressive, have a media pool cast the deciding vote – with the consensus tally of a predetermined collection of media scorers serving as a unified scorecard to be used in the event of the, errr… most hung of hung juries.

Anything would be a better ending than a draw, and they’re all better, too, than Hearns-Barkley I and II, which just make me want to hang myself instead.

I like Fitz but disagree here. The champ should not lose title with a draw, and a draw is not such a bad thing. Sometimes you cant really separate fighters in a certain fight, and one guy should not win…

[QUOTE=doom_specialist;20001930]Can't say I agree with you, since quite a few people have died in the ring since the change to 12 rounds. Not only that, if I were a fighter, I'd want fair outcomes as much as possible, and an…

[QUOTE=Marchegiano;20001427]Other sports are less deadly. We didn't get to 12 because we decided it's a nice judging number. There's more to consider. If you make the rounds too short then the fighting and pacing will be quicker, and that is…

[QUOTE=doom_specialist;20000605]In pretty much every other sport in the world "best of" competition is usually decided on an odd number, so seeing the 12th round go, or having another added doesn't seem too farfetched. The sport originally decided a winner with…