And the immediate inclination for the geniuses in my line of work is to assemble something that’s both worthy of an undisputed profundity championship, and gets posted 30 seconds before the guy’s at the wannabe website down the street.

Sometimes they make for entertaining reading – or filmmaking, as director Eric Drath will show in a wonderful Showtime documentary that’ll premiere early next month.

But in just as many cases, they don’t.

Regardless, I never could bring myself to do it for Hector Camacho.

The main reason is that, while he’s been exactly a week short of eight years, his life had actually ended several days earlier – at precisely the moment an ill-intentioned bullet violated his skull.

Whether his body or the machinery it was subsequently attached to back then knew it or not, his story was complete. And with it, the shelf life for any truly legitimate tributes had already begun to expire.

By now, all the worthwhile words to be written about him already have been.

So whether I praised him for a distinguished and decorated ring career or chastised him for what seems a dubious end amid questionable company and circumstances, I’d be piling on for piling-on’s sake.

Instead, in lieu of yet another tear-jerking coda, all I have are my own memories. And while the snippets are certainly more profound to me since he died, I concede they may not be for anyone else.

I was way up in the blue section – among the bloodiest of the nosebleeds – alongside old pal Phil MacDonald at a long since razed Memorial Auditorium in Buffalo, waiting for the WBA lightweight main event between Ray Mancini and Livingstone Bramble. 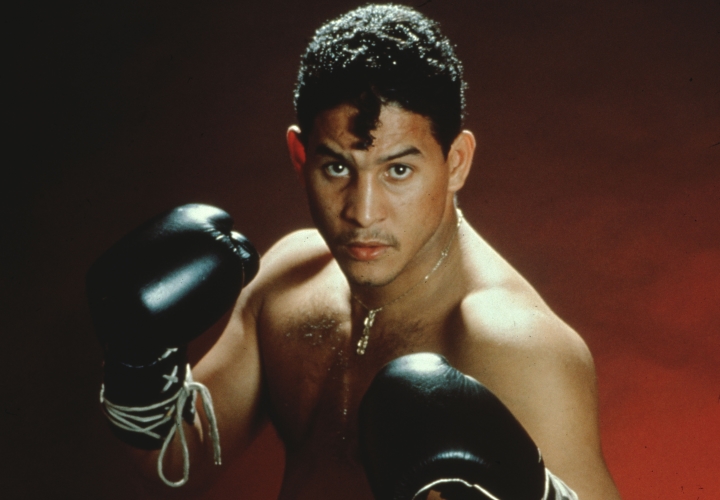 I was 15 years old, and it was my first live fight card.

Several rows down, in surroundings I still can’t afford to this day, Camacho sat in his standard early ’80s issue: Gold around the neck. “Macho” curl atop the forehead. And a cover-boy smile for all cameras within clicking distance.

He was 22 and not just the world’s best junior lightweight, but one of its best ever.

And unabashedly pursuing the popular Mancini all the way to Western New York, in a chatty campaign for a shot at the TV hero’s 135-pound belt.

He’d whipped once-beaten Panamanian Rafael Williams in a lightweight tryout just 10 days earlier in Corpus Christi, Texas, meaning all that stood between he and “Boom Boom” was an awkward guy from the Virgin Islands who’d made for lively pre-fight copy but wasn’t perceived as an actual threat.

About an hour later, though – after the challenger, one Livingstone Bramble, finished 13-plus rounds of clinically violent handiwork – it was tough to tell who’d taken the stunning “TKO by” result harder.

Jilted suitor Camacho for what it meant to his wallet… or ex-champ Mancini for what it did to his face.

Either way, when Buffalo next observed “Macho Time” 10 months later, the scene had changed dramatically.

The brave but outgunned Mancini had been bloodily “Brambled” into retirement after a losing rematch in Reno – leaving the disappointed Puerto Rican to feast on a forgettable Roque Montoya over 12 of the dullest rounds the old “Aud” ever witnessed.

Until the 15-round heavyweight main event later that night between Tony Tubbs and Greg Page – whose blubbery mental images I’m still trying to delete after 35 years – set a new standard.

A well-traveled Camacho never got closer to Buffalo than Toronto or Erie, Pa. in 62 subsequent fights; and while he and a returning Mancini did eventually get together for their own rendezvous in Reno four years later, it wasn’t nearly what it might have been had Bramble not twice intervened.

If he and Ray met as unbeatens, it would have been a classic.

But as classic rock acts, it was little more than a novelty.

Sort of like Camacho’s own career… largely a matter of inconvenient timing.

When he was young and dynamic, the truly great names weren’t yet there, leaving him to lopsidedly build a brand on the limited likes of Bazooka Limon, Jose Luis Ramirez and Freddie Roach.

And by the time they did come calling, in the unblemished forms of Julio Cesar Chavez, Felix Trinidad and Oscar De La Hoya, “Macho” was into his 30s and no longer the same – win or lose – aside from the well-established shtick.

As for me, I never shared space with him again until 2010, when I made a trip to Tampa for a February sparring match/interview with Chevelle Hallback and he was in the gym chatting up some Florida friends. I said “Hey, Champ” and got a quick, cordial nod as I left, never once assuming that a photograph then and there would have been my last chance.

I thought of it all again when I got the final word, and kicked myself anew for begging off a short drive to Kissimmee Civic Center that May – about 100 miles from where I was living at the time – for what turned out to be his final fight, an inglorious 10-round middleweight loss to journeyman Saul Duran.

Had he been able to stop time, he’d be recalled today as an all-time great.

And had I realized it as it happened, I’d have damned sure paid more attention.