Filling Out Some Future Hall of Fame Passes

A trio of television staples from the 1980s and 1990s – Donald Curry, Julian Jackson and Buddy McGirt – ascended into ring immortality last week when they were announced as the Class of 2019 inductees to the International Boxing Hall of Fame in Canastota, New York.

The three fighters combined for championships in four weight classes on the way to racking up 162 wins in 181 fights with 122 knockouts. McGirt won belts at 140 and 147 pounds, while Curry was a champ at 147 and 154, while Jackson closed out the elite-status club with runs as a kingpin at 154 and 160.

All were certainly worthwhile additions.

And while none of the three were on the ballot I sent in a few months back – for the record, I selected Ricky Hatton, Sung-Kil Moon and Meldrick Taylor – the disclosure of their enshrinement inspired me to take another look at who best warrants a hall spot alongside them.

Instead, I’m tossing out the clearly faulty crystal ball in favor of a new one, with the hope it’ll let me zero in on the candidates about whom we’ll all be writing at this time a decade from now.

To bump up the challenge a bit, the only prerequisite is that all have to be 30 or younger.

And without further ado… here goes. 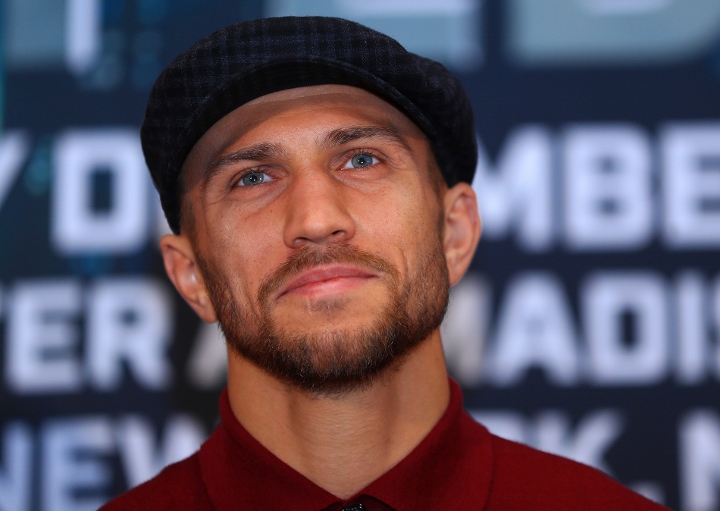 Leo Santa Cruz, 30 – He might not evoke instant hall reactions, but the guy’s put together an impressive resume across three weight divisions. It’s too bad he didn’t get Rigo on the way up, but the defeats of Abner Mares and Carl Frampton are pretty impressive. If he gets a belt at 130, cast the plaque.

Mikey Garcia, 30 – It’s not hard to find people who consider Garcia the best pound-for-pound fighter in the world – or at the very least in the top three alongside Lomachenko and Terence Crawford – which, again, is already a loftier perch than some of the more dubious inductees.

Canelo Alvarez, 28 – The fact that he’s on the verge of a third weight-class title is dampened by the fact that the belt is bogus, and doesn’t hide that he’s still in need of a legit career-definer. The narrow defeat and draw with Golovkin doesn’t yield immortality. Maybe a Charlo at 160 or a further rise to 175?

Anthony Joshua, 29 – He’s got paralyzing power, charisma and a shoulder-full of championship belts, but, to an even greater extent than Alvarez, he’s not got the signature victory. We’re all hoping to see him across a ring from guys named Wilder or Fury next year, and he doesn’t progress until it happens.

Errol Spence Jr., 28 – Make no mistake, I fully expect to check a box next to Spence’s name five years after he completes his run in the ring. But he’s not there yet. A rally to stop then-welterweight king Kell Brook in his backyard was impressive, and a rout of Garcia certainly won’t hurt the case in 2019.

Naoya Inoue, 25 – I can’t argue the fact that a guy nicknamed “Monster” would be at home in Canastota, and winning titles – or some semblance of them – in three weight classes is a pretty good way to get started. It’ll be interesting to see how much farther up the ladder he can climb.

Dmitry Bivol, 27 – He’s considered the future of the 175-pound division by no less an authority than Jim Lampley, who said, “He’s sensational. Athletic quality - A, skill level - A, intelligence and temperament - A, devotion to continued improvement – A.” But he’ll need to find and beat a real rival.

Gilberto Ramirez, 27 – If you’d have asked me after he schooled Arthur Abraham in Las Vegas a couple years back, I’d have bumped him up a level. But he’s been relatively anonymous since. A clear erasure of Jesse Hart will help, and who knows, maybe he can find himself across from a Canelo someday.

Luis Nery, 23 – OK, the slugging Mexican damaged the brand when he failed to make weight for a bantamweight defense earlier this year, but he’s been a KO machine for nine straight fights and will be an interesting proposition for any high-end guys within a class or two. A lucrative dice roll, perhaps.

FRIDAY
WBO super middleweight title – Corpus Christi, Texas
Gilberto Ramirez (champion/No. 1 IWBR) vs. Jesse Hart (No. 1 WBO/No. 18 IWBR)
Ramirez (38-0, 25 KO): Fifth title defense; Won by TKO in only other fight in Corpus Christi
Hart (25-1, 21 KO): Second title fight; Three straight wins, all TKOs, since loss to Ramirez in 2017
Fitzbitz says: The first one was more competitive than I’d have guessed going in, so I imagine this will be fun, too. Still, I’ll ride with Ramirez until another’s hand is raised. Ramirez by decision (65/35)

WBA super middleweight title – New York, New York
Rocky Fielding (champion/No. 6 IWBR) vs. Saul Alvarez (Unranked WBA/Unranked IWBR)
Why it’s garbage: So we’re supposed to ignore the fact that there’s a guy named Callum Smith who just won a tournament in which the WBA’s premier championship belt was at stake? Sorry, can’t do it. You want to get excited for a Canelo fight, fine. But to label this a title try for him is a crime against boxing.

Please, don't said me that is Dan Ambrose of Boxing News 24 under another alias in this site? This sound like Dan Ambrose.:fu2:

They really made This article Top Story of the day ? Lol shame on boxingscene. Pure trash garbage

[QUOTE=JakeTheBoxer;19347075]Spence, don`t make me laugh, who has he fought, Brook only and you Americans say Brook is not elite, so.. Spence is nobody, he is only a world title holder. To get higher status, he will have to fight at…

[QUOTE=kidbazooka;19345500]Another writer who’s a Canelo hater lol what’s new. Wtf canelo has “work to do” yet he has a better resume than guys who were “locks” like Mikey and Loma Gtfo That writer is a damn joke.[/QUOTE] It was a…

Loma, Mikey, and LSC are lock ins but Canelo has work to do? Lmao where did they find this guy? GTFO All great fighters but Canelo has the best resume in boxing today after Pacquiao.