Still a month shy of his 23rd birthday, there’s not much that Brandon Figueroa can do about his youthful appearance. (photo by Ryan Hafey)

For now, he chooses to simply use it to his advantage.

“I definitely feel like everyone underestimates me,” Figueroa (20-0, 15KOs) told BoxingScene.com. “They look at me and see any easy fighter. I’m used to it by now. Every time I leave the ring, the way they think about me changes.” 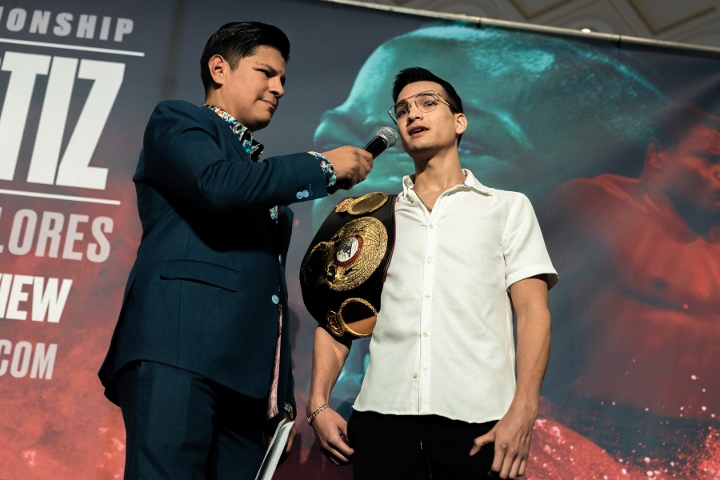 The undefeated junior featherweight titlist has been perfect to this point in his career as he heads into a dangerous showdown with former divisional title claimant Julio Ceja (32-4, 28KOs). Their bout takes place this Saturday, as part of a Fox Sports Pay-Per-View from MGM Grand Garden in Las Vegas Nevada.

It’s an odd title opportunity for Mexico’s Ceja, who comes in riding a two-fight losing streak, although being ahead on the scorecards at the time he was stopped in each of his last two starts. A freak broken nose resulted an injury stoppage loss to Colombia’s Franklin Manzanilla last May, sitting out for more than a year than landing a crack at lineal junior featherweight champion Guillermo Rigondeaux, whom he was beating through seven before getting dropped and stopped in the 8th round of their Fox-televised thriller this past June.

Figueroa enters with far greater momentum. The rising star from Weslaco, Texas—whose older brother Omar is a former lightweight champion—has scored knockout wins in each of his past three starts including a 4th round stoppage of Argentina’s Javier Chacon this past August just outside his hometown in Edinburg, Texas.

Making it to that point has come through taking every opponent seriously while also disproving any notion that he’s still too raw for this level.

“I don’t even think about how the scores were for Julio Ceja’s last fight,” notes Figueroa, reiterating his recognizing a dangerous opponent in front of him, both this weekend and any other point in his career. “Every fight, I go in believing I need to prove that I belong on a world class level.

“I need to also prove it to everyone else, including the ones who believe I’m an easy target. I know that Julio Ceja will be coming in with a game plan and aiming for the (proverbial) target on my back. I can promise this, once (Ceja) gets hit with my punching power, it’s going to be a different story. I’m glad everyone underestimates me, which I will continue to use to prove everyone wrong.”

Good fighter and guy but his title is one of the fake made up WBA titles that are destroying the sport.

He's good but still a little bit green. I don't think he can compete with other super bantamweight champions at the moment. This Saturday he will defend his title for the first time. I'll be watching.