Figueroa Admits "Pushing Through" Injuries Ahead Of Ceja Bout

No matter how he feels in the buildup, all that Brandon Figueroa can guarantee is to bring 100% of whatever he has on fight night.

The unbeaten junior featherweight titlist is prepared to defend versus former title claimant Julio Ceja, with the two colliding on Nov. 23 at the MGM Grand Garden Arena in Las Vegas, Nevada. Their bout will serve in supporting capacity to the heavyweight title fight rematch between unbeaten champ Deontay Wilder and Luis Ortiz, which tops a Fox Sports Pay-Per-View event.

It's by far the biggest stage of Figueroa’s young career, an opportunity he didn’t want to pass up even if means fighting through some discomfort.

“I've been working through a couple injuries but it isn't bad,” Figueroa (20-0, 15KOs) confessed during a recent media conference call to discuss the PPV event. “As a fighter you've got to keep moving forward. I don't want to pull out of the fight. I've just got to make it work, work around the injuries and as of right now, I'm still continuing working hard and I can't wait.” 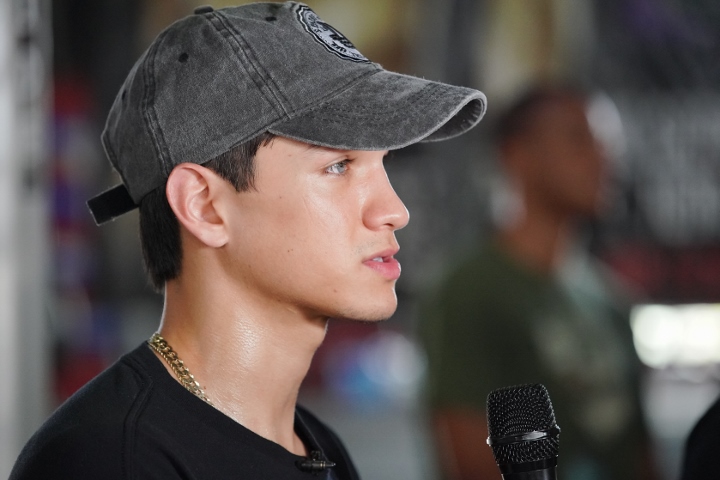 The scheduled 12-round affair versus Mexico’s Ceja (32-4, 28KOs) marks Figueroa’s first defense since receiving an upgrade in title status, though certainly not the first time he’s had to overcome training camp injuries to make it to fight night. The forthcoming event will mark his fourth ring appearance in 2019, and his first time serving on a PPV undercard. His older brother, former lightweight titlist Omar Figueroa appeared on the undercard of Manny Pacquiao’s 12-round win over Keith Thurman in a July PPV event, though suffering his—and the family’s—first pro loss in a lopsided decision to top contender Yordenis Ugas.

Well prior to the event, the elder Figueroa was often criticized for not always showing up fight night ready, on the nights when he actually showed up. Once a rising lightweight star, his career has since been plagued by injuries and other issues external to the sport.

It hasn’t been the case for the younger brother, who remains one of the sport’s rising young stars.

“It's just a matter of me pushing through it and once I see that the injury doesn't go away, once I see that the pain is too much, then we're going to have to either fight through it or we pull out but I've never pulled out of a fight due to an injury,” notes Figueroa, now in his 6th year in the pro ranks. “So I know I can pull through it. This is nothing new. I've trained without sparring for some of my fights. I've trained without running sometimes because of my foot and on fight night everything works out.

“I know that sometimes I'm not really well prepared because of the injuries but at the end of the day, I go out there and I fight my heart out and I get the W. I know some people may say it's kind of stupid to fight like that or it's kind of risky but I feel like, what doesn't kill you makes you stronger and it's the challenge of my career. I know at the end of the day it's going to make me stronger. I'm not underestimating Julio Ceja at all but this ain't the first time that I've been training injured and I've just go to push through it mentally and I've got to be strong minded and I can't let the injuries get the best of me.”