Power is often described as being an equalizer. For Deontay Wilder, it is an imbalanced equation. It is one big plus that has more than made up for his many minuses.

The power has always been there, an obvious asset as Wilder was built up as a prospect, still developing along the way, relying all the while on fast and heavy hands as he knocked out each and every one of his first 32 opponents.

The power remained as he stepped up in opposition. He’s needed it.

He turned to it, and turned it on, after Eric Molina wobbled him, as Johann Duhaupas connected repeatedly against him, as he struggled with Artur Szpilka, and after he gave away rounds this past Saturday against Gerald Washington.

None of them could be described as world-class, yet four of this world titleholder’s five defenses have given him more trouble than they reasonably should have. Molina had been knocked out in one round by Chris Arreola. Duhaupas had come up short against Francesco Pianeta and Erkan Teper. Szpilka had been stopped by Bryant Jennings. All were decent. All had surprising moments against Wilder.

Only Arreola, who never was much and had since become even less, was dispatched in a manner befitting a man who wants to be the true, undisputed heavyweight champion.

Wilder still has his flaws, which is why he still has his doubters. He gets hit by shots that would hurt him worse were they to come from better fighters. His technique still goes by the wayside, moments when “Wilder” isn’t just his last name, but an apt description as well. 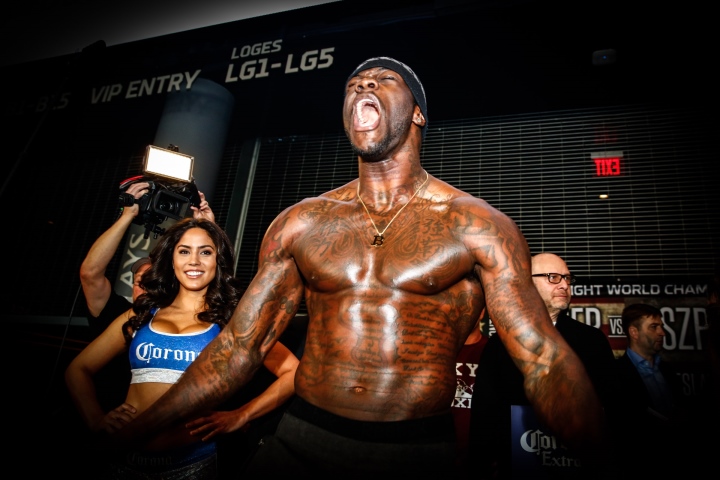 But one right hand ended things against Szpilka. A right hand and then a left hook dropped Washington, the beginning of the end.

Washington hadn’t done much either until then, but he’d done more than Wilder. Some believed he had the lead on the scorecards. The official judges didn’t quite agree with that — two had it even at 38-38, or two rounds apiece, while the third had Wilder in the lead, 39-37, or three rounds to one.

"I knew he was going to come in excited to fight for a world title. I just kept calm and found my rhythm. I really knew he was going to tire out, and when he did I took advantage,” Wilder said in a post-fight interview. "It was all about timing. I'm very smart when it comes to using different tactics in the ring.”

If Wilder truly did take the opening rounds off, then he did so because he knew he could take over. His power is a blessing, but it can also become a curse.

His equalizer is part of his calculus. He will start off slow, believing in addition by subtraction. He might not always be able to get away with it. As the rounds begin to get divided up, giving too many away can lead to his problems multiplying.

He hasn’t needed to worry about that. He can start slowly because he can finish quickly. He can throw less when he only needs to land once.

No one has been able to beat him yet. No one has truly been capable of beating him yet.

That’s not wholly Wilder’s fault. He was finally ready to face a top contender last year, willing to travel all the way to Russia to face Alexander Povetkin for the challenge and for the millions of dollars that came with it, only for the fight to be called off with less than a week to go after Povetkin tested positive for a banned substance.

Wilder also may have stepped up his opposition late last year had he not suffered multiple injuries in his victory over Arreola. He underwent surgery that kept him out for the rest of 2016.

This, then, needs to be the year that we see whether Wilder’s power will be enough, or if he will have added enough beyond it to make him an even greater threat. He has athleticism. He has speed. He has a team that has continued to work on him and with him, refining a fighter who didn’t start boxing until he was 19, who won a bronze medal in 2008 despite limited experience, who has learned on the job over these years and has been willing to keep learning despite having that equalizer available.

He still has a lot to learn.

“Each and every time I go through something inside or outside of the ring, it just makes me better and better,” Wilder said at one point before the Washington fight.

“My time off has allowed me to get a better relationship with my left hand,” he said at another point. “There are so many different ways to throw a jab that I didn't think I could do. Working with one arm allowed me to be exposed to a lot of new things. It's going to be a different Deontay Wilder in the ring.”

There’s more work to be done. He will always have a puncher’s chance. Power is an equalizer, the one big plus that makes up for his many minuses.

Removing those minuses means adding more positive attributes — giving him a greater shot beyond that one great shot.

This will be the last weekly “Fighting Words” column. Starting next week, I will be taking a sabbatical from BoxingScene.com for a couple of months. I plan to return in May. When I do return, “Fighting Words” will be on a different schedule and will no longer run every Monday.

Thank you for your time, your feedback and your support over these past 12 years. It’s truly been an honor.