It’s fitting that the final notable bouts of the year take place in Japan. As has become tradition, it is in the Land of the Rising Sun that the sun sets on boxing in 2016.

You might or might not be the target audience for this column. It’s difficult enough for many of us to watch every televised fight card in the United States, never mind the numerous significant matches that take place on a regular basis around the globe. Enterprising sorts know how to watch live streams out of every continent and from any time zone. It’s also pretty easy to find full fights uploaded shortly thereafter.

That’s not for everyone. But you should make at least an occasional habit of looking beyond what airs on HBO, Showtime, the Spanish-language stations, and the various networks that show Premier Boxing Champions broadcasts. For while a massive amount of talent either comes from or comes to the United States, many more are competing elsewhere.

After all, Roman Gonzalez was one of the best in the world well before he fought on HBO. (And Gonzalez was a fixture in Japan, fighting there on nine occasions.)

One of his potential future opponents will be fighting in Japan. That’s just one more reason to watch — to get a better grasp of the characters and storylines that may come together, to see more of the puzzle pieces that make up the big picture.

That potential opponent for “El Chocolatito” is Naoya Inoue, a 115-pound titleholder who will defend his belt on Dec. 30 in Tokyo against Kohei Kono.

Inoue is a prodigy who challenged top opposition incredibly early in his career. In his fourth bout, he outpointed Ryoichi Taguchi, who has since gone on to capture a world title himself at junior flyweight. Two bouts later, Inoue — 5-0 at the time, and just four days away from his 21st birthday — took on titleholder Adrian Hernandez. Inoue knocked him out in six rounds.

That was a heck of a start. Two fights later, Inoue outdid himself by jumping from 108 to 115 pounds and taking on aging titleholder Omar Narvaez, whose only loss had come against Nonito Donaire. Inoue obliterated him in two rounds. He’s now made three defenses of that belt and is 11-0 with 9 KOs. He’s 23 years old and is seen by hardcore fight fans as one of the best in the world.

Kono is a decent foe, though nowhere near the level of the other top names at junior bantamweight. He won a world title in 2014 and lost it this past August to Luis Concepcion.

Inoue should get past him and then will need to wait for bigger things. Roman Gonzalez is in negotiations for a rematch with Carlos Cuadras. There’s also been a desire among boxing fans for Gonzalez to give a sequel to former flyweight titleholder Juan Francisco Estrada. Gonzalez vs. Inoue remains a viable, desirable third option. 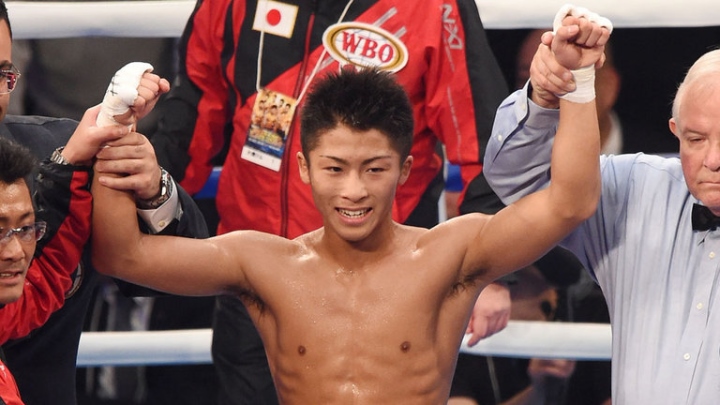 On the undercard of Inoue-Kono is someone who has faced Gonzalez — Akira Yaegashi.

Yaegashi is a three-division titleholder who got his start at 105 pounds. That’s why his name might be familiar, as it was at strawweight where Yaegashi won a cult classic over Pornsawan Porpramook in 2011. After losing his title to Kazuto Ioka, Yaegashi went up to 112 and dethroned lineal champion Toshiyuki Igarashi. He made three successful defenses before getting steamrolled by Gonzalez in 2014.

That led Yaegashi to move down to 108. He failed in his first attempt, getting knocked out by Pedro Guevara in a fight for a vacant title at the end of 2014. He got a second chance at the end of 2015, taking a wide decision over (and a belt from) Javier Mendoza. His second defense will come against Samartlek Kokietgym, who has five losses on his record, with the last defeat coming against Inoue about 27 months ago.

The winner of Yaegashi-Kokietgym may be keeping a close eye on a fight taking place the next day in the city Gifu — on a Dec. 31 card airing on tape delay in the United States on beIN Sports Espanol. Moises Fuentes and Kosei Tanaka will fight for a vacant title.

Tanaka is a former 105-pound beltholder who won a title in his fifth pro fight and made one defense before moving up in weight. He’s now 7-0 with 4 KOs. He, like Inoue, is quite young at just 21 years old.

Fuentes, meanwhile, is 24-2-1 with 13 KOs. He was a titleholder at 105 pounds from 2011 into 2012, with his final defense coming with a knockout of a familiar name in former beltholder Ivan Calderon, which turned out to be Calderon’s final fight. Fuentes then moved up to 108 and challenged one of the best of that division, Donnie Nietes, fighting to a draw in 2013. They had a rematch a year later; that time Nietes triumphed with a ninth-round knockout. Fuentes has been rebuilding since then, putting together five straight victories.

In Kyoto, Jonathan Guzman will defend the title he just won at 122 pounds, taking on Yukinori Oguni.

Guzman is returning to Japan after his triumph there in July, when he beat Shingo Wake with a brutal 11th-round stoppage, improving his record to 22-0 with 22 KOs. That earned Guzman a vacant belt left behind when Carl Frampton departed the division. His first defense comes against Yukinori Oguni, who is 18-1-1 with 7 KOs and has gone 8-0-1 since his lone loss, which came in 2013 against the aforementioned Wake.

The junior featherweight division is in flux. The best fighter there remains Guillermo Rigondeaux, though too few want to face him because of the reality that Rigondeaux is a tremendous challenge who does not bring the commensurate financial reward. Jessie Magdaleno just topped Nonito Donaire. Hugo Ruiz came off a rivalry with Julio Ceja, only to lose his title in a stunner to Hozumi Hasegawa. Hasegawa has since decided to go out on top and announced his retirement. There are others. Guzman, who hails from the Dominican Republic, has largely fought there or in the United States. He has several potential options in 2017.

Also on that card, Kazuto Ioka will defend his flyweight title against Stamp Kiatniwat. Ioka is the name in this equation, a former 105- and 108-pound titleholder who fell short when he first moved up to 112, dropping a split decision in a title fight with the awkward Amnat Ruenroeng back in May 2014. A year later, Ioka picked up a secondary title — he was the WBA’s “regular” titleholder at a time that Juan Francisco Estrada was the sanctioning body’s “super” titleholder.” Estrada’s departure to another division has elevated Ioka.

Several departures, in fact, have giveb Ioka an opportunity to elevate himself. Roman Gonzalez left the division. Ruenroeng got knocked out. The fighter who ended Ruenroeng, Johnriel Casimero, has just announced his own move to 115. It’s a rapidly changed division, one that has also seen the recent entry of former 105- and 108-pound titleholder Donnie Nietes.

Kiatniwat is unbeaten at 15-0 with 6 KOs but also is very young, at just 18 years old, and is untested. Others have risen to the occasion quite quickly. Ioka may be too much, too soon for him.

The most interesting fight that day, however, will take place in Tokyo, where 130-pounders Jezreel Corrales and Takashi Uchiyama will meet in a rematch of their stunning April meeting.

Uchiyama was one of boxing’s longest-reigning titleholders, dating back the start of 2010.  Corrales took a huge step up when they met, but he made a huge impression in the process, dropping Uchiyama three times in the second-round for the victory.

Uchiyama is now 37. Time may finally be catching up with him. This rematch will let us know. The winner will find himself in the mix in a division that also includes fighters such as Vasyl Lomachenko, Francisco Vargas, Orlando Salido, Jason Sosa, as well as the winner of Jose Pedraza vs. Gervonta Davis, the returning Takashi Miura (a former titleholder who has lost to Uchiyama and Vargas), contender Miguel Berchelt (who will face Vargas in January) and prospect Tevin Farmer.

Also on that show is 108-pound titleholder Ryoichi Taguchi, who as mentioned above rebounded from his 2013 loss to Naoya Inoue by winning a title at the end of 2014. He appeared on one of these shows at the end of 2015 and will use this card to attempt to make his fifth successful defense. His opponent is Carlos Canizales, a young undefeated prospect from Venezuela.

These are the final fights of note for 2016. The year in boxing didn’t actually end on Dec. 17, when Bernard Hopkins lost to Joe Smith on HBO. Only after these fights are over may we truly be out with the old and in with the new.