Luis Ortiz could have fought in front of a lively crowd of more than 50,000 people in Texas this September. Instead, he waited another two months to return to the ring, performing on a November night in Monte Carlo as perhaps 1,000 high rollers, if even that many, struggled to pay attention to something that could only charitably be described as action.

At a time when Ortiz is trying to become the best heavyweight in the world before what little time is left in his career runs out, he wound up in a stinker of a fight against a stinker of an opponent. Malik Scott barely put up a fight, but he also rarely gave Ortiz a chance to make a fight break out. Instead, Scott did laps until time lapsed, not throwing punches and in essence throwing the fight.

The good news for Ortiz is that Scott’s running won’t do too much damage to Ortiz’s run at the heavyweight title. All that movement doesn’t make Ortiz’s move any less of a good decision.

Ortiz’s decision brought derision earlier this year when he left Golden Boy Promotions. The company had stuck with him despite a positive test for a banned steroid in 2014.

It placed him on the undercard of the Gennady Golovkin-David Lemieux pay-per-view. It got Ortiz in against Bryant Jennings on an HBO main event at the end of last year. And after Ortiz blasted out Jennings, the network remained interested in him as a potential opponent for its other top heavyweights and continued to feature him, airing him this past March as he stopped late replacement Tony Thompson.

Ortiz could’ve faced Alexander Ustinov on the Canelo Alvarez-Liam Smith pay-per-view. Instead, he parted ways with the promoter, buying out his contract for a “low seven-figure payment in multiple installments,” according to Dan Rafael of ESPN.com.

He signed with a new one in October, inking a deal with Matchroom Boxing.

His first fight with the promoter was this past weekend, high up on a card in Monte Carlo.

The attendance was smaller. The show was aired in the daytime in the United States rather than being on a pay-per-view undercard. The fight was terrible on the eyes.

It was still where he needed to be.

Ortiz had been limited by Golden Boy’s business relationships, both those it works with and those it doesn’t. He was the World Boxing Association’s interim titleholder, which had him in line to face the winner of the Tyson Fury-Wladimir Klitschko rematch. There was just no telling how long he’d have to wait in that line. Klitschko was tied to HBO. Golden Boy is now doing its major fights with that broadcaster and hasn’t worked with Showtime in some time. 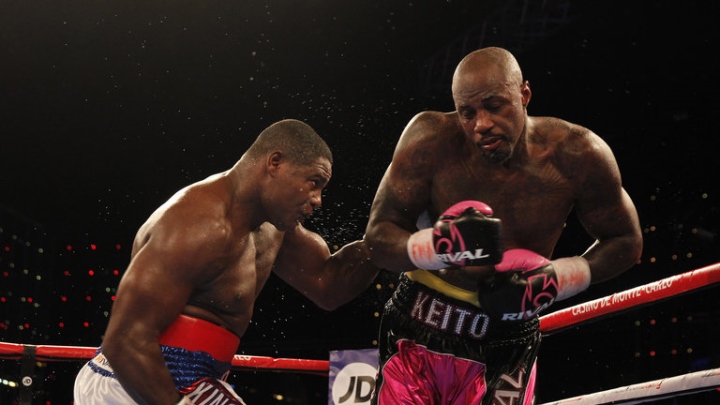 Going to Matchroom opened up more doors. The casinos in Monte Carlo covered the cost of Ortiz staying busy. Now he can fight on other shows the Eddie Hearn-helmed company puts on in the United Kingdom while awaiting a big opportunity.

With Hearn, Ortiz could go on to face Anthony Joshua, a heavyweight titleholder also under the same promotional banner and who has an exclusive contract with Showtime. Ortiz also would be free to take on Deontay Wilder, a heavyweight titleholder who has been featured on Showtime and on the “Premier Boxing Champions” series run by Al Haymon, the adviser whom Golden Boy is currently suing.

“With the landscape at the moment, Luis Ortiz can be a real player," Hearn told IFL TV last month. “The problem with Luis Ortiz is that he's bloody good and dangerous, but no one knows who he is outside of boxing. They know that I can raise his profile to get those big fights. The plan is, to box him on the [Monte Carlo] card against Malik Scott, probably box him on the [Dec. 10 Anthony Joshua] card, and then box him...... we'll probably do a show in the [United] States out in February.

Hearn spoke a month before the Scott fight. The promoter’s ambitious schedule will still work thanks to the fact that Scott barely landed a blow.

Ortiz took some criticism, including from his new promoter, for not doing more to try to end the aesthetic agony. It can be incredibly difficult for a fighter, even a very good one, to hit an opponent who doesn’t want to engage. No less a boxer than Bernard Hopkins was made to flail at Morrade Hakkar back in 2003 until Hopkins was able to put Hakkar away.

Scott, for his chronic disappointment, is fast on his feet and quite able to stay out of harm’s way. Ortiz didn’t take many chances. He was able to put Scott down. He was able to hit Scott 146 times, including with exactly 50 percent (111 of 222) of his power punches. Scott, however, was there primarily to survive. Even after one of Scott’s trainers exhorted him to let his hands go in the final round, he threw just nine punches and landed only three.

There will be those tempted to say the plodding Ortiz was exposed. It may indeed be wise for his opponents to use movement against him. Still, no other name heavyweight is going to fight — or not fight — like Scott did, because at some point they would still need to remain in range to try to win.

For now, Hearn’s job will be to try to make Ortiz look good, and then for Ortiz to do his own part.

Should both succeed, that’ll lead Ortiz into a title shot. We don’t yet know when, or against whom. But for a fighter in his situation — he turned pro at 30 after escaping Cuba, has not yet earned big paychecks after nearly seven years in the paid ranks, and owes his former promoter plenty of money — there’s more certainty than ever before.

He took a gamble in order to get this chance.

[QUOTE=Redd Foxx;17197839]Everyone seems to know how to catch a guy whose only inclination is to evade. It's not as easy as it looks. Kovalev couldn't do it with Chilemba and Chilemba was actually fighting him back. Same with Crawford fighting…

I don't think Ortiz looked as bad as many were making out, but he did expose a few limitations here. After failing to get at Scott's head he should have gone to the body the way Chisora did when he…

[QUOTE=LetOutTheCage;17197824]Sorry but I disagree completely. This was my first time watching Ortiz fight, he was supposed to be this monster that every other heavyweight was terrified of stepping in the ring with him...Yet he went the distance against an opponent…

[QUOTE=Redd Foxx;17197563]Ortiz is too wise to flail at a runner. Scott wasn't just shelling up, he was actively retreating and occasionally bursting into a strike (including a wicked headbutt that stunned Ortiz). You can't run while throwing combos. Not the…