Felix Verdejo: I Give Myself a 'C' - I Want To Keep Working Hard

At the Turning Stone Resort and Casino in Verona, New York, Felix "El Diamante" Verdejo got off to a smooth start.

A few months ago, Verdejo parted ways with his career trainer and manager, Ricky Marquez. The two of them are currently embroiled in a heated legal battle back home in Puerto Rico. 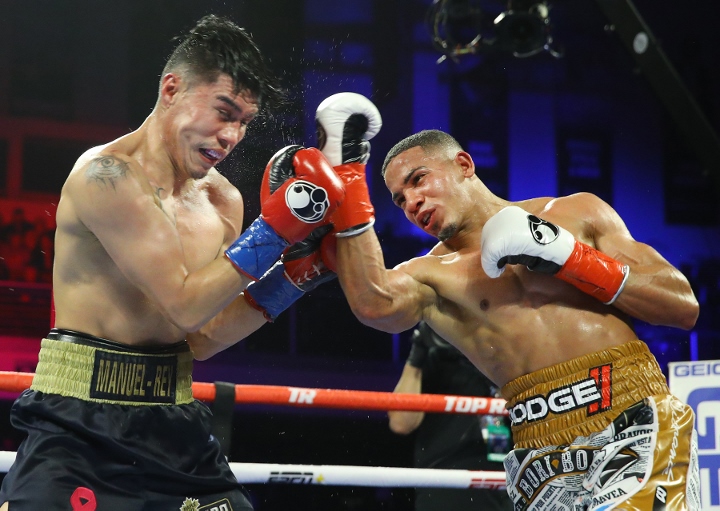 He admits that there is still a lot to work on.

“I give myself a ‘C.’ I want to keep working hard and keep developing because I want to look like an ‘A’ fighter," Verdejo said.

“I have the desire. I have the hunger. I’m going to keep working hard for all the Puerto Ricans and all the Boricuas.”

Diaz looked very sharp with his punches and movements, as he shut out former junior featherweight world title challenger Adeilson dos Santos (19-8, 15 KOs) in an eight-round featherweight bout. All three judges scored it 80-72 in his favor.

“I am very happy to have returned to the winning route," Diaz said. "I showed that I don't only know how to brawl. I also know how to box very well. Before, what I wanted was to give fans wars to entertain them, but I learned that I can also give good, entertaining fights by boxing well.”

To me it seems like Verdejo can't adjust. He is very repetitive with the way he fights, he has no extra dimensions. He looked good as a prospect but once you go to the next level it is very telling…

Verdejo is the perfect example of what happens when you overpay and over hype a fighter. He was looking real good until the money and hype got to him. People were actually saying that Verdejo would stop Oscar Valdéz when…

I tried to find the lozado fight on YouTube and it's not there. Guess Top Rank burned it like PBC did the Broner - Maidana fight.

[QUOTE=ELHITMAN606;20335363]Felix Verdejo is the Puerto rican Francisco Bojado[/QUOTE] Francisco bojado is every Puerto rican boxer!!! All hype!!! Every so called next tito has been that only to Puerto Ricans. Verdejo Pedraza Juanma Artista Perez Cesar Seda Rico Ramos Luis Cruz…

I enjoyed watching him as a prospect and he is still young so he got a chance.