Felix Cash bludgeoned his way to a fifth-round victory over Jason Welborn in a one-sided top of the bill on Eddie Hearn’s third edition of Fight Camp at Matchroom’s Essex headquarters.

The weather forecast had been for thunder storms, but the main event did not manage to live up to the previous two week’s headliners, as Cash was too strong, punched too hard and had too much ambition for Welborn. 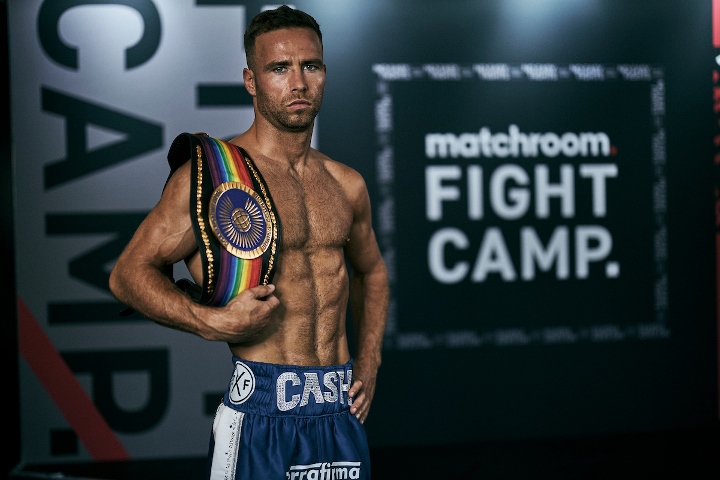 The only blip on the night for Cash was a point deduction for repeated low punching in the fifth round, but Cash piled on the pressure to knock Welborn down twice and force the stoppage.

“It was a decent performance,” Cash, 27, said. “It took about a round to settle after that it was just a matter of time before I broke him down.”

Hearn said he hoped to make a fight between cash an Matteo Signani, the European champion from Italy.

Welborn – who was stopped by Jarrett Hurd for the WBA and IBF super-welterweight titles in 2018 – hoped to survive Cash’s initial onslaught and come on in the later rounds, but he seldom had much success. Cas, who was defending his Commonwealth middleweight title, kept backing him into the ropes and a relentless body assault soon took its toll.

After the point deduction in the fifth round, Welborn tried to open up, but it played into Cash’s hands. Backed into a corner, Cash banged away to head a body before a clubbing right dropped Welborn. There was no let up when the action continued, with a series of blows eventually putting Welborn over again.

Michael Alexander, the referee, waved it off as Welborn’s corner threw in the towel with 12 seconds remaining in the fifth round.

“I reckon I am the best middleweight in the country,” Cash said. “I’ll fight anyone.”

Second or third time I've seen Cash and about the same for Wellborn. Felix is a big middleweight and appears to have good power and conditioning. He had some defensive lapses that he needs to work on; If someone with…

Thanks for telling me what Cash said, he's the hardest man to understand in boxing lol..

[QUOTE=BigZ44;20706024]Matteo Signani, ancient dude that's fought an DAZN Italy. Easy work for Cash[/QUOTE] Yeah, I remember he won a terrible fight on an Italy card now. I expect Cash vs Morrison next.

Cash did the job. Welborn landed a fair few clean shots though. Against anyone a big hitter Cash might struggle!