Farmer on Diaz Rematch: I'm Gonna Beat His Butt Next Time For Sure

Tevin Farmer has heard the chatter and seen the mock posters that junior lightweight world titlist Joseph Diaz Jr. and former three-division titleholder Abner Mares have posted on their social media pages as they try to talk up a potential showdown that surely would stoke interest among fans in Southern California, where both call home.

But Farmer has a message for Diaz: Not so fast.

“I’ve definitely seen it but (Diaz) is moving a little too fast. He needs to slow down,” Farmer told BoxingScene. “We are gonna fight again. We have to. But I don’t feel like he wants to fight me again because he knows on Jan. 30 that he fought the worst Tevin Farmer and I was still able to win five rounds.”

In an upset, Farmer, who was making the fifth defense of his 130-pound belt, lost to fellow southpaw Diaz by scores of 116-112, 115-113 and 115-113 in Miami on a DAZN card that Matchroom Boxing promoter Eddie Hearn placed there as part of Super Bowl weekend festivities. After Farmer lost the much-anticipated bout, he quickly exercised his contractual right to an immediate rematch and said he has no intention of allowing Diaz to face Mares or anyone else before he gets a second crack at him.

“I’m not really worried about it,” Farmer said of the Diaz-Mares hype. “A contract is a contract. That’s what we signed. We’re definitely fighting again. I wanted to do it right away. I talked to my lawyer (Traci Bransford) right after the fight and I told her to get on it. That guy is not better than me. He was better than me that night. I wasn’t as good as I am that night.

Diaz (31-1, 15 KOs), whose win over Farmer was his fifth in a row since dropping a decision challenging Gary Russell Jr. for a featherweight world title in May 2018, fought perhaps his most complete fight against Farmer. The 29-year-old Farmer (30-5-1, 6 KOs), 29, however, was not close to the fighter who had been dominating opponents with enough offense to go with his defensive wizardry.

When the Diaz-Farmer rematch might happen is anyone’s guess given that boxing has been shut down during the coronavirus pandemic. Even if the sport was up and running the sequel would still be months off because of the horrendous cut Diaz suffered over his left eye during the second round from an accidental head butt.

“It was definitely a bad cut. So whenever he’s ready to go then we’re ready to go, but my next fight will be for the title guaranteed -- unless they offer me a lot of money to step aside. Then it’s a different story,” Farmer said with a laugh. “Other than that, it’s the next fight. He’s not allowed to have another fight before he fights me.” 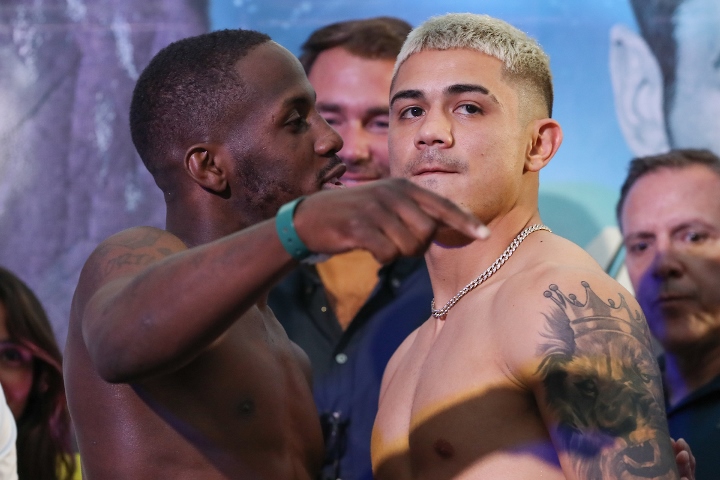 Lou DiBella, Farmer’s co-promoter with Hearn, said he believes the earliest the fight would happen is late summer but that there is a good chance it might not take place until later in the year, depending on how quickly boxing can get up and running again as well as how Diaz’s cut heals.

“There is nobody involved in this fight – not Tevin, me, Eddie, Diaz or (Diaz promoter) Golden Boy – that says we must rush this rematch,” DiBella said. “I would think that fight is not one of the first fights back when we can start doing shows again. Diaz had the injury and they fought at the end of January and you also have a lot of guys who haven’t fought since September. But Tevin has an iron-clad rematch clause.”

The Philadelphia-born Farmer, who now lives in Sicklerville, New Jersey, said he has been keeping in shape while much of the country is on lockdown. He goes to a gym 15 minutes from his house where he works out in private while another gym is in the process of being built in his basement.

All the while, Farmer said he is thinking about facing Diaz again and turning the tables after a poor performance in January.

“There were a lot of things that went wrong. There’s some personal stuff that the world will know about in the upcoming months,” Farmer said, declining to go into specifics when pressed. “I won the first round but even after the first round I didn’t feel like I was myself. You could see it and I hurt my right hand in the first round.”

While Farmer said he plans to hire a nutritionist to help make weight for the rematch he did not blame trouble with the weight for his loss.

After the fight, Farmer had to go to the hospital to get checked out as a precaution but was released a few hours later. Still, he was very disappointed in his performance.

“I couldn’t do anything. It was like I was stuck in quicksand,” Farmer said. “Usually, I’m on point, my legs are on point. They only thing I had was my cardio, which was great. But my body wasn’t reacting. I wasn’t breathing hard at all in the fight but my body didn’t react how I wanted it to react.”

Before the fight was made, Farmer and Diaz, who was a 2012 U.S. Olympian, clashed at a Canelo Alvarez news conference in Las Vegas. They had to be separated as tempers flared and bad blood raged. They carried it over through the buildup to the bout as they exchanged some harsh words. But Farmer said he emerged from the fight with respect for Diaz.

“JoJo Diaz is not a pushover. He can fight his butt off,” Farmer said. “But he had his best night and I had my worst night. I can’t wait to fight him again because if I can still win four or five rounds on my worst night against Joseph Diaz having his best night – oh, I just can’t wait (for the rematch). I’m so excited. But 100 percent I respect him. I’m proud of him.

“I lost fights early on in my career and I came back. I saw him lose a big fight to Gary Russell and then he comes back and beats a guy like me and I’m by far No. 1 in the division skill-wise and he was able to beat Tevin Farmer, so that’s really, really big. But I’m gonna beat his butt next time for sure.”

Farmer’s plan is reclaim his world title, make one defense and then move up to the talent-rich lightweight division that boasts standouts such as Vasiliy Lomachenko, Teofimo Lopez Jr., Devin Haney, Gervonta Davis and Ryan Garcia.

“I’m not sure yet,” Farmer said of who he wants to fight most a 135 pounds. “I’m thinking about JoJo Diaz after this coronavirus situation is over before I go up to lightweight, see what’s on the table and what we can make happen and fight for a world title. But now it’s me and JoJo Diaz again. It’s gonna be a hell of fight but I am still betting on myself.”

JoJo just way too accurate and active for Farmer

They better make sure the ref does something about Diaz rabbit punching. It's considered an illegal punch for a reason Farmer was clearly affected by them shots.

Funny how Eddie Hearn is no longer pushing this guy like he was lol.