Farmer Counts His Blessings Ahead of Hometown Title Defense

Little evidence remains of the last title defense made in Philadelphia by one of the city’s own. Bernard Hopkins—entering the 15th defense of his record-breaking middleweight title reign back on March 29, 2013—retired from the game more than two years ago, as did his fleeting opponent, France’s Morrade Hakkar, who toiled in obscurity for another nine years before calling it a career in 2012.

Tevin Farmer was still a few months shy of his 13th birthday at the time, and years away from even thinking about taking it up as a hobby much less making it a career. It’s ironic yet fitting that the 28-year old southpaw becomes the one to end the 16-year drought, given the unlikelihood of his even making it this far.

Yet eight years after suffering a knockout loss in his pro debut and barely 18 months after a gunshot through his right hand was supposed to end his career, Farmer proudly waves the flag of the City of Brotherly Love ahead of his next ring appearance. The homecoming serves as his fourth title fight in less than eight months, as he defends versus Ireland’s Jono Carroll (16-0-1, 3KOs) this Friday at Philadelphia’s Liacouras Center.

“It’s like a two-minute walk from where I grew up,” Farmer (28-4-1, 6KOs) says of his own first fight back at home in nearly two years, along with his first-ever title fight at home. “Everyone will be there. It will be great. It’s a great feeling, knowing it will be a great crowd with that live Philly energy.

“I just hope (Carroll) brings it.” 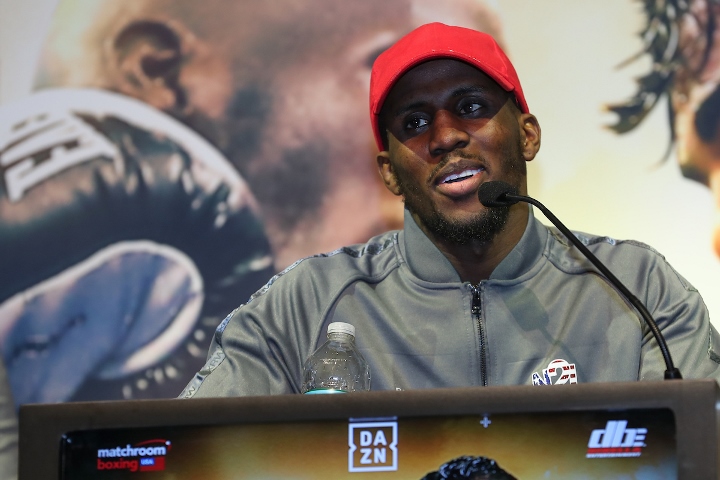 It’s been a while since a challenger has been able to bring it to Farmer, who once upon a time was just an opponent brought to other promoters’ shows.

This weekend marks Farmer’s first headlining date on the platform—and his first televised main event in the United States since an Oct. ’12 loss to then-unbeaten Jose Pedraza. For that fight, the Philly southpaw was brought in as a late replacement opponent and the clear B-side on the promotion.

It was also the last time he was handed a loss.

Stumbling out to a 7-4-1 start in the pro ranks following a meager 16-fight amateur career, the southpaw changed everything about his approach—new trainer, manager, mindset and eventually a promoter in Lou DiBella to look out for his best interests.

He hasn’t lost in 22 fights since, although the one non-win along that stretch came in the form of his being cheated twice in one night.

Farmer’s first career title fight came in Dec. ’17, remarkably four months after being shot and already in a year which also included a torn biceps which further slowed his career progress. He seemed to have done more than enough to claim a vacant 130-pound title, only for Japan’s Kenichi Ogawa to walk away with a split decision deemed among the year’s worst in-ring robberies.

The pain was short-lived, at least in terms of Farmer’s unbeaten streak when Ogawa was popped for a banned substance found in a random drug test, changing the result to a No-Contest. Farmer would have to wait another eight months for a second shot at the vacant title, traveling to Australia where he thoroughly outboxed Billy Dib in taking a landslide decision last August.

Whereas ring activity was a constant issue in the past, Farmer has been more active than ever. Friday will mark his third title defense, all coming in the span of five months thanks to a co-promotional agreement with Matchroom Boxing’s Eddie Hearn, whom has prominently featured the southpaw on sports streaming service DAZN.

Never before has he been featured this prominently—nor has the city of Philadelphia in the 16 years since hosting its last homegrown title fight.

“It’s a blessing; for me to be the first one to bring it back in 16 years is an unbelievable feeling,” Farmer notes. “Not everyone was able to fly out to Boston (for his knockout win over James Tennyson last August), fly out to Australia, or even drive up to New York (for a knockout win over Francisco Fonseca last December).

“We talked to Eddie and Lou about making this fight and here we are.”

Not bad for a young man who was nowhere to be found on the boxing front—much less believed to ever make it this far—the last time the rest of us were at this moment.

hope that he beats this mouth carroll guy