Estelle Yoka-Mossely remains perfect as a pro and with hopes of adding to her 2020 campaign.

Yoka-Mossely pulled a clean sweep, winning by scores of 80-72 on all three scorecards. 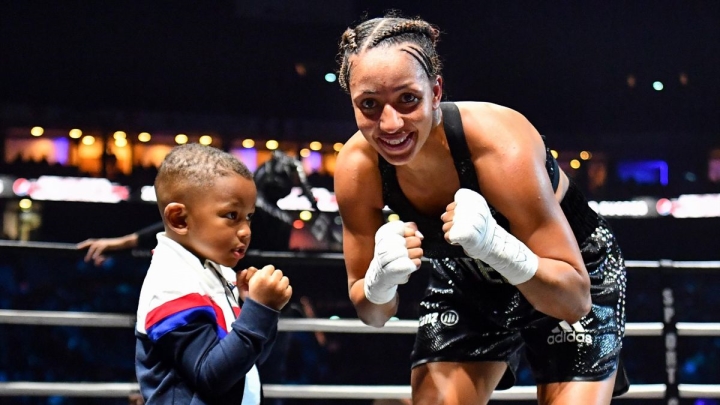 The eight-round shutout was accurate in its scoring, though Yoka-Mossely was forced to put in work to maintain her unblemished record. The 2016 Olympic Gold medalist—the first-ever French female boxer to accomplish the feat—was fighting for the second time since giving birth to her second child this past May.

Yoka-Mossely jumped out to a strong start against Gongora, a dual-sport athlete from Marseille. The opportunity for the 27-year old former kickboxer came on three days’ notice after Yoka-Mossely’s original opponent tested positive for COVID-19.

The threat of an early stoppage came about in round two, when Gongora was forced to contend with a cut just outside of her left eyebrow. Her corner managed to control the wound, allowing Gongora to soldier on and ultimately extend Yoka-Mossely the full eight-round distance.

Yoka-Mossely seemed content with putting in rounds, boxing smartly and landing crisp right hands from long range. Most of the bout saw the 28-year old from Bagnolet, France utilize lateral movement and picking her spots to pick up her second straight shutout win in 2020. Yoka-Mossely (8-0, 1KO) outpointed previously unbeaten Aurelie Froment over eight rounds this past September in Nanterre, France.

As was the case in Yoka-Mossely’s previous appearance, this bout took place on the undercard of her husband and fellow 2016 Olympic Gold medalist Tony Yoka (9-0, 8KOs), who faces Germany’s Christian Hammer in a scheduled 10-round heavyweight content.

A win by Yoka could set up yet another family affair in December, with Yoka-Mossely at least eager to fight in the final month of 2020. Yoka is due to contend for the EBU heavyweight title versus Croatia’s Petar Milas, a fight which is under the control of Ringstar Promotions-France after having won a purse bid earlier this month.

[QUOTE=DaNeutral.;20911739]Bollocks. She lost that fight. 8 round fight you would struggle to give 3 rounds to Estelle. Hate robberies, that girl put some serious graft in to that.[/QUOTE] I was impressed with Gongora. Last minute replacement with hardly any fights…

[QUOTE=SteveM;20911973]Watch that little kid! Both mum and dad are gold medallists - WTF! awesome gene set.[/QUOTE]Hopefully in the future he's a clean athlete and he doesn't go dodge multiple drug tests like his pops lol no ones forgotten Tony Yoked…

[QUOTE=BIGPOPPAPUMP;20911714]Estelle Yoka-Mossely remains perfect as a pro and with hopes of adding to her 2020 campaign. The unbeaten lightweight prospect cruised to an eight-round unanimous decision over Emma Gongora in their ESPN+ televised opener Friday evening local time at H…

Bollocks. She lost that fight. 8 round fight you would struggle to give 3 rounds to Estelle. Hate robberies, that girl put some serious graft in to that.