As it relates to always in-shape super featherweights Masayuki Ito and Jamel Herring, making weight was a mere formality.

Through their relentless training regiments came a weigh-in free of drama as both boxers are set for their super featherweight title fight Saturday evening.

Ito checked in at a fighting fit pounds in defense of his title. The always-chiseled Herring—a decorated U.S. Marine who served two tours in Iraq and was captain of the 2012 U.S. Olympic boxing team—showed up at a career-lightest 129.6 pounds. 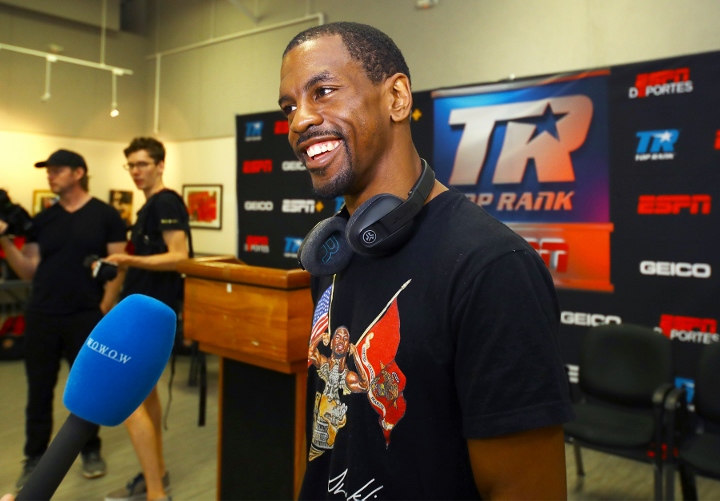 Ito (25-1-1, 13KOs) attempts the second defense of the 130-pound strap he obtained mere miles from Saturday's venue, scoring a dominant 12-round decision over then-unbeaten Christopher Diaz last July at Kissimmee Civic Center. The 28-year old from Japan bumped off another unbeaten contender in his most recent outing, scoring a one-sided 7th round stoppage of Evgeny Chuprakov last December in Japan.

Saturday’s bout will mark just the second in the United States for Ito, who trains in southern California under the guidance of renowned trainer Rudy Hernandez.

Herring (19-2, 10KOs) enters his first career title fight—and also first scheduled 12-round contest—having won his last three starts since signing with Top Rank last spring. The move was accompanied by a shift in training camps, as the 33-year old southpaw now plies his trade under the watchful eye of Brian 'BoMac' McIntyre, best known for his work with unbeaten pound-for-pound king and three-division titlist Terence Crawford. His win streak has taken place at super featherweight since moving down from the lightweight division where he'd spent most of his pro career prior to 2018.

In the evening's chief support, former two-division titlist Jose Pedraza looks to bounce back from a hard-fought loss to Vasiliy Lomachenko as he takes on veteran Antonio Lozada in a 10-round lightweight contest.

Both bouts will air live on ESPN, beginning at 10:00pm ET.

Jeyvier Cintron and Koki Eto collide in a scheduled 10-round battle to determine the mandatory challenger for the presently vacant WBO super bantamweight title. Cintron (10-0, 5KOs)—a two-time Olympian for Puerto Rico—weighed 114.6 pounds as did Japan’s Eto (24-4-1, a former title challenger who has won his last seven starts.

The winner will be next in line for whomever prevails in the June 19 vacant title fight between Aston Palicte and former three-division titlist Kazuto Ioka.

Former super flyweight king Carlos Cuadras looks to regain his bearings as he takes on veteran Daniel Lozano in an eight-round bantamweight heat.

Mexico's Cuadras (37-3-1, 27KOs)—a stablemate of Ito as both train under Hernandez—checked in at 117.8 pounds, as did Bowling Green's Lozano, who hopes to snap a two-fight losing streak.

Cintron-Eto and Cuadras-Lozano come as part of a nine-fight preliminary card, with select bouts streaming live on ESPN+ preceding the linear portion of the telecast.