ESPN Names Mayweather 8th Most Dominant Athlete of Past 20 Years

ESPN The Magazine has ranked Floyd Mayweather Jr. at No. 8 on its list of the most dominant athletes of the past 20 years.

The list, revealed Tuesday, will be dissected as part of a “Dominant 20” special ESPN will air Thursday night at 9 p.m. ET. The retired Mayweather is one of only two boxers on the list, 11 spots ahead of 19th-ranked Manny Pacquiao.

Mayweather, 41, retired for the third time last year as an undefeated superstar who won world titles in five weight classes. The Grand Rapids, Michigan, native also made more than $1 billion in purses throughout the course of his 21-year pro career, thanks in large part to nine-figure paydays for pay-per-view extravaganzas with Pacquiao and Conor McGregor. 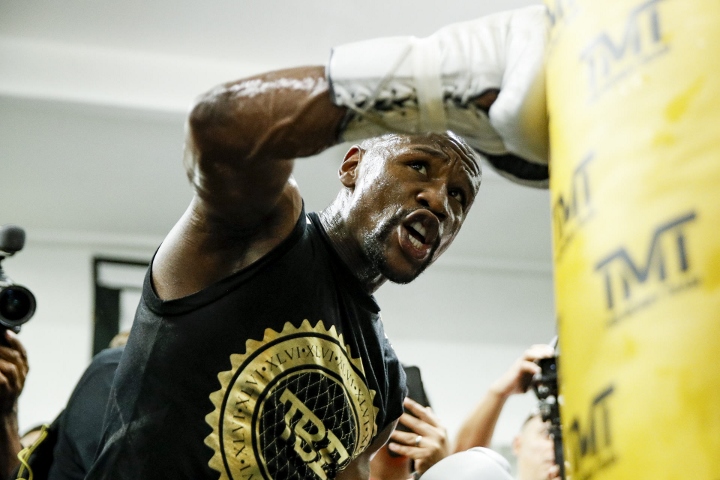 Mayweather (50-0, 27 KOs) retired, supposedly for good this time, after beating McGregor, a UFC superstar who boxed professionally for the first time, by 10th-round technical knockout August 26 at T-Mobile Arena in Las Vegas.

Tiger Woods was ranked No. 1 on ESPN The Magazine’s list. Other athletes placed ahead of Mayweather were LeBron James at No. 2, Peyton Manning at No. 3, NASCAR driver Jimmie Johnson at No. 4, tennis legend Roger Federer at No. 5, golfer Annika Sorenstam at No. 6 and Formula One driver Michael Schumacher at No. 7.

Women’s soccer star Marta Vieira da Silva (No. 9) and record-setting sprinter Usain Bolt (No. 10) rounded out ESPN The Magazine’s top 10. The rest of the list includes soccer legend Lionel Messi at No. 11, tennis icon Serena Williams at No. 12, WNBA star Lauren Jackson at No. 13, soccer superstar Cristiano Ronaldo at No. 14, tennis star Novak Djokovic at No. 15, track and field phenom Allyson Felix at No. 16, Barry Bonds at No. 17, Mike Trout at No. 18, Pacquiao at No. 19 and Tom Brady at No. 20.

The release of the list caused co-hosts Stephen A. Smith and Max Kellerman to disagree during a segment Tuesday on ESPN’s “First Take.” Smith argued that Mayweather belongs at No. 3 on the list, behind only Serena Williams (No. 1) and Woods (No. 2).

“Number three on the list – Max Kellerman, you’ll appreciate this – Floyd ‘Money’ Mayweather,” Smith said. “[He’s] 50-0, even though I consider him 49-0 because I didn’t consider Conor McGregor a boxing match. I’m sorry. But 49-0, you wanna call it 50-0. But taking control of his own career, running his own show and generating in excess of a billion dollars for himself along the way, I mean, that’s just pure business brilliance. Give him, Al Haymon, Leonard Ellerbe all the credit in the world. We can’t ignore the fact that the man is undefeated, unblemished in a pugilistic sport for his entire career. We cannot ignore that.”

Kellerman, a longtime boxing analyst, first for ESPN and now HBO, argued that Roy Jones Jr. belongs ahead of Mayweather on any such list. Jones was widely regarded as the best boxer, pound-for-pound, in the sport until Florida rival Antonio Tarver knocked him out in the second round of their May 2004 rematch in Las Vegas.

“Number three is not Floyd Mayweather, Stephen A.,” Kellerman explained, “because when they were at their best and their primes overlapped, Roy Jones Jr. was considered by everyone in the world better than Floyd Mayweather. Now he started getting knocked out later in his career, when he was old and melted back down from heavyweight, lost 25 pounds of lean muscle mass, was never the same again. But in his prime, Roy was the most dominant boxer I’ve ever seen.”

[QUOTE=Wicky;18590287]These lists are always so stupidly American-centric. NASCAR!! Really? Who, outside of the US, has been influenced by NASCAR?[/QUOTE] ESPN is an American company. Why wouldnt it be US focused? If BBC Sports made a list, Im sure it would…

[QUOTE=aobura;18588907]ESPN is a real joke - 21 years undefeated, won titles at 5 different weight classes, the only boxer to hold two belts at two different weight divisions at the same time (147 & 154), generated more money than any…

[QUOTE=Boxfan83;18590794]Dont know the guy but its obvious that either he lost a lot of $ betting against Kobe, hes a Celtics fan, or hes really really high. Maybe all 3 but its obvious his hate has taken him far from…