Escandon Upsets Tepora With Body Shot In 1st Round

ONTARIO, California – Oscar Escandon entered the ring Saturday as the undeniable ‘B’ side of his fight against Jack Tepora.

The determined Colombian performed as if he were the favored fighter by knocking out Tepora with a body shot in the first round. Escandon’s perfectly placed left hand, a liver shot that snuck around Tepora’s guard, left a temporarily paralyzed Tepora on the canvas, unable to even attempt to get to his feet.

Referee Jack Reiss declared Escandon the winner 1:30 into the first round of a scheduled 10-round featherweight fight on the Tony Harrison-Jermell Charlo undercard at Toyota Arena. 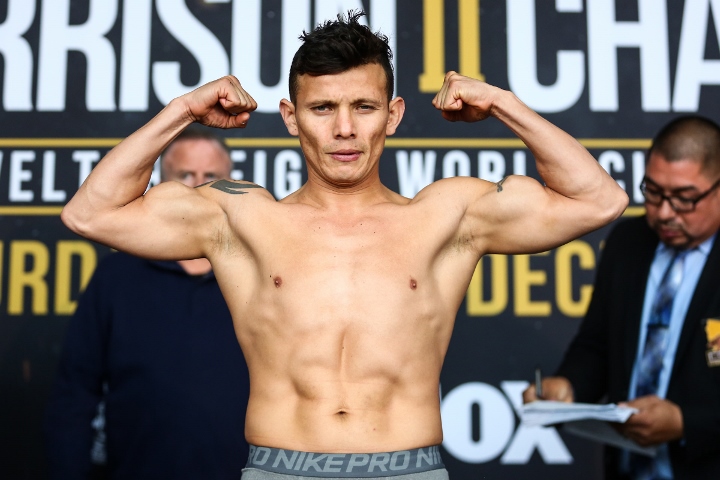 His quick knockout marked the most meaningful win of Escandon’s career, which includes technical-knockout losses to Gary Russell Jr. and Brandon Figueroa. The 35-year-old Escandon (26-5, 18 KOs) had lost three straight by TKO entering this fight – to Russell, Tugstsogt Nyambayar and Figueroa.

The Philippines’ Tepora, a 24-year-old contender who’s promoted by Manny Pacquiao, lost for the first time as a pro (23-1, 17 KOs).

Escandon went after Tepora as soon as their fight started and backed him up with a right hand that landed up top. Tepora tried to fire back, but he couldn’t fend off the determined veteran.

With his back against the ropes, Escandon connected with a left hook that sent Tepora down to his gloves and knees. Reiss counted to eight, but he waved an end to the fight because Tepora didn’t indicate that he’d even try to get up.

Tepora was nothing special! It was only a matter of time before he got caught! Good win for Escandon!

Love that fighter, glad to see him get a good win

Feel bad for Tepora he missed a big moment first fighting on pacquiao undercards because of weight and just got his train derailed..hopefully he can bounce back. Had a lot of popularity going for him but hey it happens to…

[QUOTE=jreckoning;20271772]His name is actually Jhack Tepora. Don't ask me why his parents didn't know how to spell Jack. LOL. Early ko's can happen to anybody especially if they are cold. Probably why you see guys going slow and trying to…