Erislandy Lara once again has a super welterweight title around his waist.

Once the top-rated fighter in the division, the 36-year old Cuban southpaw picked up his first win in nearly two years after stopping Mexico’s Ramon Alvarez in the 2nd round of their Premier Boxing Champions (PBC) on Fox headliner Saturday evening at Minneapolis Armory in Minneapolis, Minn.

The bout figured to be over before it even began following Friday’s weigh-in follies. Alvarez tipped the scales at 158.6 pounds, well over the 154-pound divisional limit. It was known earlier in the morning that he was going to miss weight, although Lara—who weighed 153¾ lbs.—insisted the show would go on regardless of what the scale read.

It was a decision he initially had second thoughts about once the action was underway.

“I felt the extra weight,” Lara told Fox’s HeidiAndrol after the win. “Maybe I shouldn’t have bothered to cut weight myself, but I wanted to regain this title. But I definitely felt those four extra pounds. 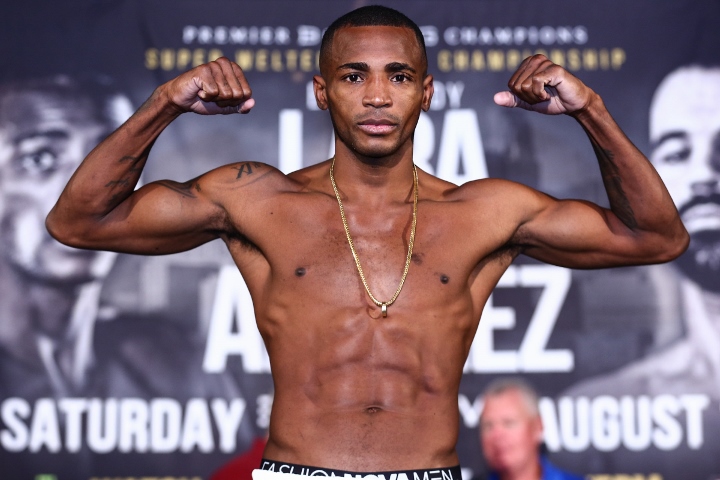 Part of the determination in proceeding as planned was the familial revenge angle sought. Lara dropped a competitive and disputed 12-round decision to Ramon’s younger brother, Saul ‘Canelo’ Alvarez in their July 2014 clash. Canelo has since emerged as the World middleweight champion, while Lara stayed put at super welterweight, reigning as a titlist until suffering a 12-round loss to Jarrett Hurd in their fantastic title unification last April.

It was mission accomplished on that front, as Lara was always a class above Alvarez and more so against a depleted version. Even with Alvarez rehydrating to 177 pounds by fight night, he was no match for the new age version of Lara who commits far more to his punches as he enters the twilight of his career.

The opening round offered little in the way of a highlight reel but action picked up in a hurry in round two. Lara connected with a left hand which froze Alvarez, with a follow-up left sending him straight back into the ropes and nearly out of the ring. The manner in which the ropes broke his fall was correctly ruled a knockdown, although it was a matter of time before his night would come to a close.

That moment would come mere seconds later. A flurry of power shots had Alvarez (28-8-3) under siege, on his way to the canvas again before referee Mark Nelson waved off the contest.

The official time was 2:03 of round two.

Lara wins for the first time since a 12-round decision over Terrell Gausha in his final successful title defense in Oct. 2017. The stoppage was his first since halting a hobbled and unretired Yuri Foreman in the 4th round of a Jan. 2017 clash which served as the last-ever headliner on Spike TV.

Saturday’s win keeps him in the mix near the top of the super welterweight division, picking up a secondary title on his second try. He fought to a 12-round draw with Argentina’s Brian Castaño for this very belt back in March. The title became available after the unbeaten Castaño bailed on a rematch with Michel Soro due to a dispute over drug testing and a failed promise of their fight purse being deposited into an escrow account.

His loss was ultimately Lara’s gain, as he now functionally becomes the mandatory challenger to unified titlist Julian Williams, whom bested Hurd in a terrific 12-round shootout this past May in the greater Washington D.C. area, their fight also airing live on Fox.

Also at the top of the division is another recently crowned titlist in Tony Harrison, who is eyeing a rematch with former champ Jermell Charlo later this year. Another title fight rematch is in the works as Williams and Hurd plan to run it back in December.

It’s just as well, as none of them are necessarily on Lara’s hit list anyway.

“I’ll fight anybody in the division,” Lara noted, though with a disclaimer. “If it has to be a rematch with someone like (Hurd or Castaño), I don’t mind doing those fights again but I’d rather fight the very best in my division or near my division.

“I want to fight Errol Spence or (a rematch with) Canelo Alvarez.”

[QUOTE=wildman;20029095]Nothing but a keep busy tune-up fight. Lara should be fighting better opposition.[/QUOTE] - -He ducked Lady Androgynous for this farce that paid him more than that fight. Hides from the Charlene sisters. All the low hanging fruit he can…

That’s exactly how Clenelo would look if he hadn’t used PEDs for years.

Another Alvarez beat like a dog he is :dance: disgusting cheat family

[QUOTE=juandabomb;20029189]canelo has to avenge..LOL[/QUOTE] He already got his gift v Lara. We know Canelo doesn’t go back into rematches once he gets his gift win.