Stockholm, Sweden - Erik Skoglund (25-0) won the vacant IBO Int´l 175 lb title with a unanimous decision after twelve against tough South African Ryon Liebenberg in a bloody, messy fight filled with wrestling on the inside and holding and hitting. Skoglund came out of an in-fight in the sixth bleeding badly from a cut by the right eye. It was ruled it had been caused by a legal punch but appeared to have been caused by the many head clashes, some more accidental than others. The cut kept bleeding freely even as Skoglund was interviewed minutes after the fight. Liebenberg also suffered  cuts but they more of the "normal" kind.

It became a tense tactical affair dominated by Skoglund´s better boxing but also his habit of throwing one punch and then smother his opponent. In this fight Liebenberg was constantly able to get one arm free and punched with Skoglund trying to avoid the punches and that led to a lot of wrestling on the inside.

In the eleventh Skoglund landed with a good right and it appeared that the South African went down from that, but it was ruled a no-knockdown. 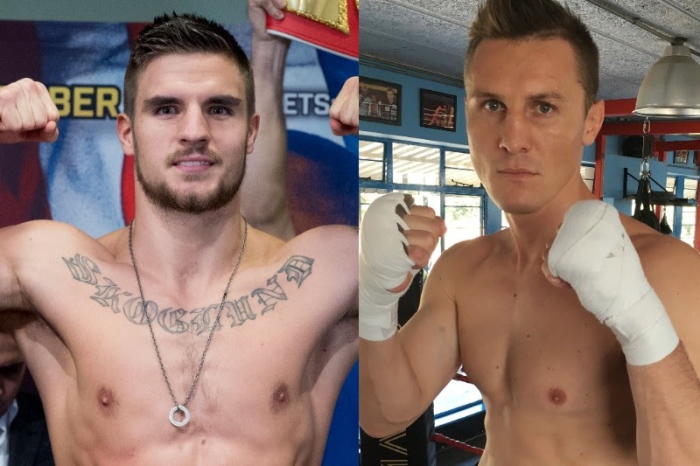 WBC female super welterweight champ Mikaela Lauren (27-3) stopped outclassed challenger Ivana Habazin (15-3) 1.55 into the third after a one-sided fight. Lauren, 40, have constantly improved in her boxing and is now better than ever. As for Habazin, well, it looked as if she came for the payday and looked resigned to defeat from the first bell. Habazin took a steady beating and was under severe pressure when referee Juergen Langos made a well timed stoppage.

Next up could be the Nordic Queen Lauren) vs the Swedish Princess  (Klara Svensson) - big female fights are rare but this one would be big for Sweden.

Heavyweight Otto Wallin (15-0) showed what over 100 rounds of sparring with Anthony Joshua can do and stopped Brazilian Irineau Beato Costa Jr (19-7) 35 seconds into the third. Costa was down twice in the first, twice more in the second and was on the floor early in the third as well when it was stopped. Wallin, a southpaw, looked good but it must be said that Costa´s punch resistance appears to be gone and he is 0-6 in Europe - and still undefeated at home.. It was scheduled for eight.

Female super lightweight contender Klara Svensson (16-1) returned after almost a year out and outscored Lucia Morelli (19-6) after eight two minute rounds. Svensson controlled most of the action but wasted a lot of punches  in a messy fight. It was score 79-73 twice and 80-72, all for the Swedish Princess.

The Golden Boy, super middleweight Oscar Ahlin (now 13-2) was far from golden in his performance against teak tough Brit Patrick Mendy (17-10-1) and lost a unanimous decision after eight. Mendy appeared to be too strong for Oscar both mentally and physically and wore his opponent down. Ahlin, a slick counterpuncher, had his moments but could never stun Mendy, who kept the fight at close range. Many rounds were difficult to score but it was obvious that Mendy was winning the fight on pure strength and his unorthodox style of boxing. Ahlin finished with a cut eye and bad nosebleed. It was scored 78-74, 78-75 and 77-76.

In an early undercard fight of the year candidate jr middles Daniel Hartvig (7-0-1) and Nikoloz Gvajava (6-0-1) drew over four very hard-fought rounds. At the end Harvig fought with both eyes swollen and cut. Hartvig is not known for his defence and he walked into Gvajava´s left hook time and time again in the first and looked unsteady but kept coming. He did better in the second as Gvajava appeared to punch himself out during the tough exchanges and in the third he looked ready to go - but Hartvig tired as well and his left eye was almost shut. In the fourth both looked spent with Hartvig hurt at the end by a right from Gvajava. At the end it was scored 38-38 twice and 39-37 for Hartvig.

Sauerland Promotion´s show at Hovet Arena in Stockholm opened with hardfought four rounder at bantamweight between Angelique Hernandez and Karina Kopinska from Poland.  Kopinska, now 6-10-3, scored her second win in Sweden and won a split decision after an exellent fight. It was scored 39-38 and 39-37 for Kopinska and 39-37 for Hernandez from Stockholm, now 1-1.