Eric Molina is Hoping To Land a Fight With David Price

Heavyweight contender Eric Molina’s manager, Lee Holliday, is working with the British Board of Boxing in hopes of getting Molina an early release from his suspension.

Molina was given a two-year suspension by the British Boxing Board for an illegal substance discovered in post-fight testing following his loss to Anthony Joshua in England on Dec. 10, 2016.

“I’m hopeful that the British Boxing Board will consider allowing Molina an early release on his suspension,” said Holliday.  “It is coming up on two years since the Joshua fight.  I know David Price is looking for an opponent in England.  If we are fortunate to get the release, Molina would be happy to fight Price.”

The British Board of Boxing found a banned substance and Molina thought it was part of the B12 supplement he was taking. 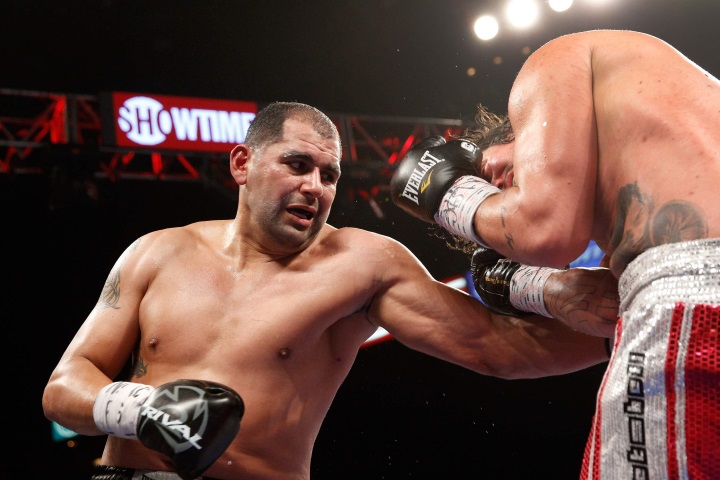 IN OTHER NEWS: TACOMA, Wash. – For four rounds, Giovanni Cabrera Mioletti was able to do whatever he wanted in the ring, landing a barrage of punches seemingly at will.

So much so in fact, that there would not be a fifth round.

Junior lightweight Cabrera Mioletti defeated Carlos Padilla after the ringside doctor stopped the fight at the conclusion of the fourth round in their Battle at the Boat 117 main event Saturday at the Emerald Queen Casino in Tacoma, Wash.

The entire card was chalk full of devastating knockouts as four of the six bouts ended early.

Cris Reyes improved moved to 4-0 by registering his third consecutive win by knockout. Reyes put away Keith Wolf in the second round (1:58) of their 138-pound bout by TKO.

Juan Gomez opened the night by winning his professional debut with a third round TKO over Gilberto Duran.

[QUOTE=pillowfists98;19088155]Really? A former British and Commonwealth HW champ and a 2 time World Title challenger are "the worst heavyweights of the modern era". **** off.[/QUOTE] Molinas world title fight against AJ was possibly the worst title fight of all time.…

[QUOTE=iamboxing;19088432]name me someone in the modern era worse than price[/QUOTE] Stiverne. Martin. Arreola

good fight, pricey looked a bit better last fight surprisingly so i think i'd give him a good shot then again weve seen fighters on molinas level demolish price in the past.

No no no. Drug cheats are a blight on the sport. You get a 6 month ban and a lucrative rematch in the US. Not the UK.

Can't hate on this fight if I'm honest, I actually fancy Price's chances in this one.