Randers, Denmark - Enock Mwandila Poulsen (11-0) won the vacant EU 140 lb title in style as he outscored Pole Michal Syrowatka (22-3) over twelve fast-paced rounds that followed the same pattern: Poulsen showing excellent lateral movement with the strong and willing Syrowatka chasing him. Michal was outboxed more or less in every round but showed good fighting spirit and kept trying until the end.

This EBU sub-title means that Poulsen now enter the ratings (EBU) in the top 6. 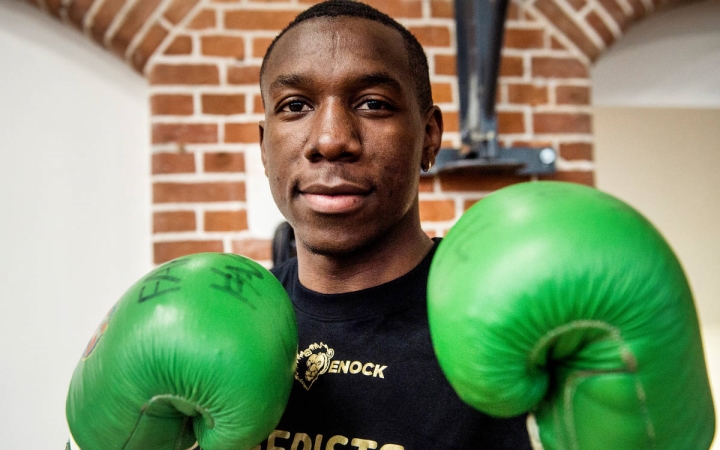 Ditlev Rossing (12-0) defended the WBC Youth title with a TKO win over American Demetrius Banks (10-8-1). Rossing, 24 years old, was allowed a final "graduation" defence while Banks, 38, couldn´t win the title no matter how.

Rossing had a point deducted in the fifth for a blatant low blow and when Rossing was a little low in the sixth Banks played it out big time. He also kept complaining about being hit on the back of the head but referee Erkki Meronen would have none of it - and he was right.

Rossing threw big right handers, most partly blocked by Banks who showed good defence. In the 8th Banks, tiring and well behind on points, went down and in fact out with his hand clutched to the back of his head. -It hurts real bad, he said but even his cornermen urged him to get up and continue to fight.

It was not a good fight. Banks, a late sub, fought as a spoiler while Rossing, cut over the left eye, couldn´t hurt his opponent.

Jeppe Morell (10-2) stepped in class as he took on Finland-based Cuban Dayron Lester (11-3) and his lack of experience showed but he still won a split ten-round decision and won the vacant IBF Baltic title. It was close all the way and both were on the floor but overall Morell´s workrate won it for him while Lester spent too much time posing in-between showing off his superior boxing skills.

Lester showed his class in the first  few rounds and showed slick moves along with some showboating. However, after an accidental clash of heads in the fourth Lester turned away and got a short timeout but  didn´t appear to have fully recovered when the fight resumed and Morell stunned him with a left and later in the round floored him.

Late in the sixth Morell went down after a right from Lester but was up quickly and the bell came to his rescue. Lester was now working harder and showboating less but it was if the sharpness had left him and Morell pulled ahead. In the tenth the Cuban pulled out all stops and won the round.

It was as seen a difficult fight to score with many close rounds and Morell´s workrate vs Lester´s skills. The Finnish corner headed by Kalle Helenius (Robert´s father) were not happy at all with the decision.

Super welterweight prospect Oliver Meng (6-0) outscored tough Frenchman Flavien Bruno Bogongo (6-8-4). Bogongo´s record is deceiving and reflects the tough domestic scene in France and he gave the Dane a tough fight. Meng, a southpaw, could score with his fine right hook but he could never hurt Bogongo, who seemed to get stronger and stronger as the fight progressed but it wasn´t enough to win rounds and he lost by 80-72 on all cards.

Debutant Victor Ramon opened this Danish Fight Night promotion (billed as the Jorgen Hansen Memorial) with four round points win over veteran Herman Isava (10-21). Isava, from Venezuela but based in Spain, gave Ramon a good learning fight but lost on scores of 40-36 twice and 39-37 after four.  Ramon made his debut as an amateur fighting as a superheavyweight but was trimmed down to super lightweight for his debut as a professional boxer.

Female featherweight Sarah Mahfoud was left without fight after Olivia Gerula arrived from Canada without proper medical documents. Another opponent was booked but she failed to arrive.