Ellerbe: Would Have Been No Pac-Thurman If Floyd Wanted Rematch

Leonard Ellerbe, CEO of Mayweather Promotions, immediately dismissed that possibility after Pacquiao beat Keith Thurman by split decision Saturday night at MGM Grand Garden Arena. Mayweather was there, Ellerbe explained, because he wanted to watch the fight live and because his company was a co-promoter of the show.

As Ellerbe told BoxingScene.com last week (https://www.boxingscene.com/ellerbe-floyds-very-content-no-interest-pacquiao-rematch--140932), Mayweather has no intention of exploring the possibility of facing Pacquiao again. 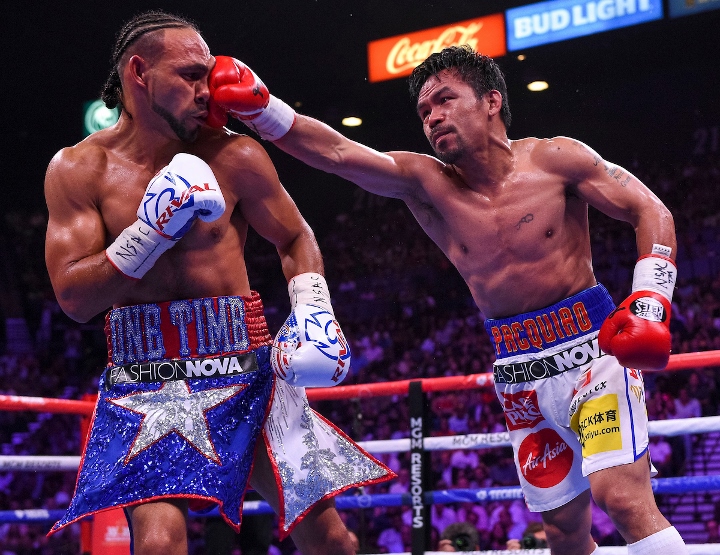 The 40-year-old Pacquiao’s performance against a 30-year-old, previously unbeaten welterweight champion would lend credibility to a rematch with Mayweather, who hasn’t faced a championship-caliber opponent in nearly four years. Mayweather, 42, appears content in his third retirement, however, and apparently isn’t interested in enduring what would have to be a rigorous training camp for a second fight against Pacquiao.

A Mayweather-Pacquiao rematch wouldn’t generate more than $600 million in overall revenue again, but it’s still the most profitable pay-per-view event that can be made in boxing.

“He’s a fan when he wants to be,” Ellerbe said of Mayweather. “He wanted to see this fight and obviously, we were promoting the fight. But he knew what happened [Saturday night] was gonna happen. … He wasn’t surprised. That’s all he just said, ‘That doesn’t surprise me. That’s what Manny Pacquiao do.’ And he says the same thing all the time. ‘It’s different until you get up in there with that dude [Pacquiao].’ Because it looks like, ‘Oh, he little.’ But Manny Pacquiao is strong. He’s awkward. Fast feet. Fast hands. You know, and again, he looked fresh. And I know what that comes from – great rest. They worked smarter instead of harder in camp and that was the difference, in my opinion, why he looked so fresh against a young guy.”