Ellerbe: Miller 'On The Cusp' of 135-Pound Title Shot

Southpaw Ladarius Miller will make his third straight appearance and eighth overall at Sam’s Town Hotel & Gambling Hall in Las Vegas on Friday night, where the 25-year-old pursues his ninth consecutive victory and fifth knockout during that time against Ricardo Garcia.

“Memphis” Miller (17-1, 5 KOs) is 6-1 with three knockouts at Sam’s Town, where his last fight in August was a 135-pound unanimous decision over Dennis Galarza in the main event. Galraza (16-4, 9 KOs) lost his second-straight bout and first to a southpaw, failing to rebound from April’s unanimous decision loss to two-time title challenger Edner Cherry.

“Sam’s Town has afforded us the opportunity to build our young prospects and to keep them busy, and Ladarius has come a long way, placing himself on the cusp of getting a major opportunity,” said Leonard Ellerbe, CEO of Mayweather Promotions.

“Ladarius has made tremendous strides in becoming a better fighter, we’re proud of what he’s accomplished and the improvements he’s made during each fight, and of the fighter he’s become. We’re looking forward to what’s in story for him in 2019.” 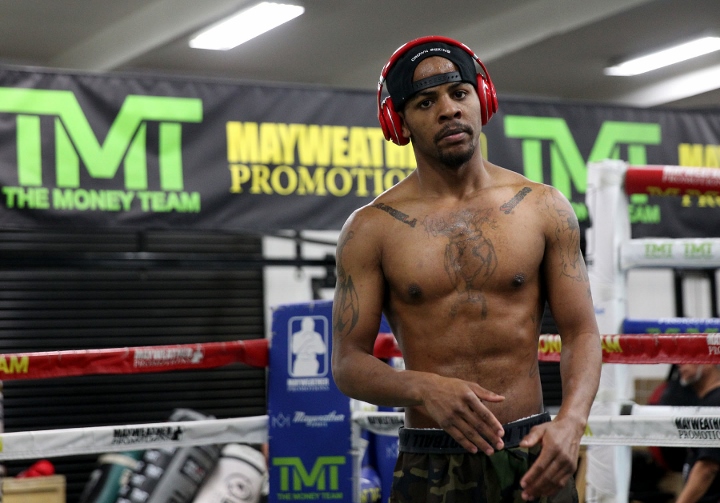 Miller’s only loss was by six-round unanimous decision to Rolando Chinea in Sam’s Town debut in February 2016. Since then, Miller’s winning run has included victories by eighth-round TKO and unanimous decision over previously once-beaten fighters Jesus Gutierrez (April 2017) and Jamel Herring (August 2017).

“This is the third time this year I’m fighting at the Sam’s Town, but it doesn’t matter where I’m fighting, as long as it’s an opportunity to put on a show,” said Miller, a native of Memphis, Tennesee.

“Floyd Mayweather and Leonard are moving me in the right direction, and with this being the last fight of this year, I think their game plan is to get me to a title shot sometime soon, so I’m closer than I might think to a title shot, which could maybe in the middle of 2019.”

“I’m ready for all of the top guys who are past, present and future belt-holders, the title eliminators and the mandatories. I believe in challenging myself and I wanna be a Hall of Famer one day in this sport. That means stepping into the ring with the best in my weight class,” said Miller.

But Miller must first get beyond the seasoned Garcia (14-3-1, 9 KOs), a 32-year-old from the Dominican Republic who never has been stopped but is 0-3-1 in his past four fights.

“Right now, the name that I’m focused on is Ricardo Garcia, because I can’t underestimate anybody,” said Miller. “That’s the guy I’m fighting, next, but definitely once I get past this guy, I’ll be able to give you any name that you want to hear.”

[QUOTE=SinderellaMan;19331273]Thought he was talking about Big Baby at first glance....[/QUOTE] Big Baby getting lined up for a 135lb title? Dude's head alone is a welterweight. :)

Thought he was talking about Big Baby at first glance....