The Mayweather Promotions CEO respects Russell’s confidence, capabilities and pedigree. Ellerbe also is certain that Davis would beat the highly skilled southpaw if the fight Russell suggested comes to fruition.

Russell told BoxingScene.com last week that if he can’t land a fight against Leo Santa Cruz that thus far has eluded him, he wants to move up from featherweight to junior lightweight to challenge Davis (https://www.boxingscene.com/russell-gervonta-fought-nobody-deal-with-me--138376). Russell-Davis would be a big event in the Baltimore/Washington, D.C., area and is one of the most appealing options for both boxers.

“I think he’s an exceptionally talented fighter,” Ellerbe told BoxingScene.com regarding Russell. “I have a great deal of respect for him, his pops, all his brothers. They’re from the city [of Baltimore]. They can bump. [Russell is] very confident and he should be. But it’s a whole different ballgame, when you’re talking about fighting ‘Tank.’ I asked about that fight before, because ‘Tank’ asked me about that fight. ‘Tank’ wants that fight. I’m very, very confident that ‘Tank’ beats him. I wouldn’t think twice about it.” 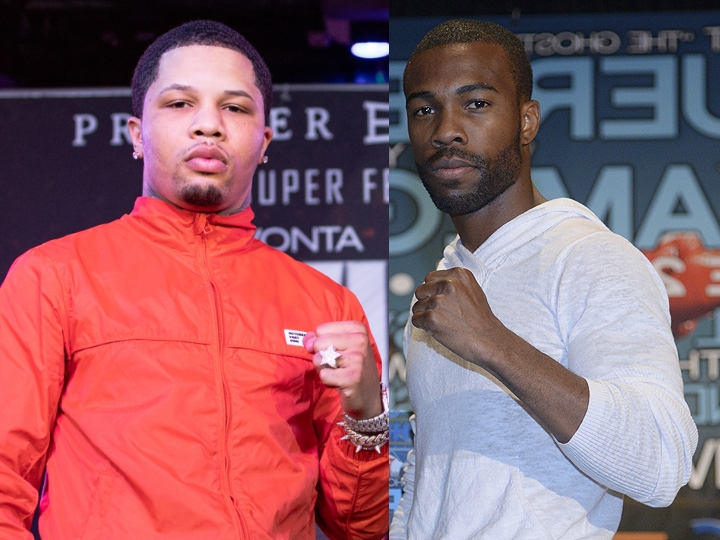 Ellerbe and Mayweather have drawn criticism for Davis’ level of opposition since he stopped Jose Pedraza to win the IBF 130-pound championship in January 2017.

The powerful southpaw from Baltimore was supposed to face former three-division champion Abner Mares on February 9. Ruiz replaced Mares (31-3-1, 15 KOs) on 10 days’ notice because Mares suffered a detached retina in his right eye during a sparring session late in January.

Davis is expected to make another defense of his WBA “super” 130-pound championship July 27 at Royal Farms Arena in Baltimore. Cuba’s Yuriorkis Gamboa (29-2, 17 KOs), a 37-year-old former champion in three divisions, is among the opponents Davis’ handlers are considering for that bout.

Russell, meanwhile, is preparing for a defense of his WBC 126-pound championship against Spain’s Kiko Martinez (39-8-2, 28 KOs). Showtime will televise the Russell-Martinez match as part of the Deontay Wilder-Dominic Breazeale undercard May 18 from Barclays Center in Brooklyn.

Assuming he overcomes Martinez, the 30-year-old Russell, of Capital Heights, Maryland, intends to pursue a featherweight title unification fight against Santa Cruz (36-1-1, 19 KOs), who holds the WBA title. If that bout doesn’t come together, Russell is more than willing to move up four pounds to face Davis.

“I think he’s serious,” Ellerbe said. “He’s very confident. He’s an extremely talented, young fighter, who has great belief in his skill set. That’s why you make great fights like that. But I’m very, very confident in ‘Tank.’ ”

Ellerbe expressed that he, too, is serious about matching Davis against Russell, who would be, by far, the best opponent of Davis’ six-year pro career.

When are you gonna announce a competitive fight for Davis, Ellerbe?

Let’s see it!!! Great fight against two high IQ boxing talents. Timing and speed over speed...my money is on Tank. Floyd Mayweather vs Zab Judah all over again.

Elleber better wait til after the Russel-LSC fight, then Tank vs Russell will be huge.