Ellerbe Looking at Akhmadaliev, Roman or Fulton for Angelo Leo

Rising super bantamweight contender Angelo Leo (19-0) is on the cusp of fighting for a world title.

Leo answered several fans’ questions on a variety of topics. One of which was how did Leo get into the sport.

"I would have to say that my dad put me in boxing when I was 8 or 9 years old. I was first in soccer and then karate but those weren't working out for me. Then he put me in boxing and I started liking it. I won 5 or 6 undefeated fights in the amateurs and that is when I knew I was pretty good at this and I just stuck with it and I started to dream of becoming a world champion. I just stuck with it since I was 8 or 9," Leo explained. 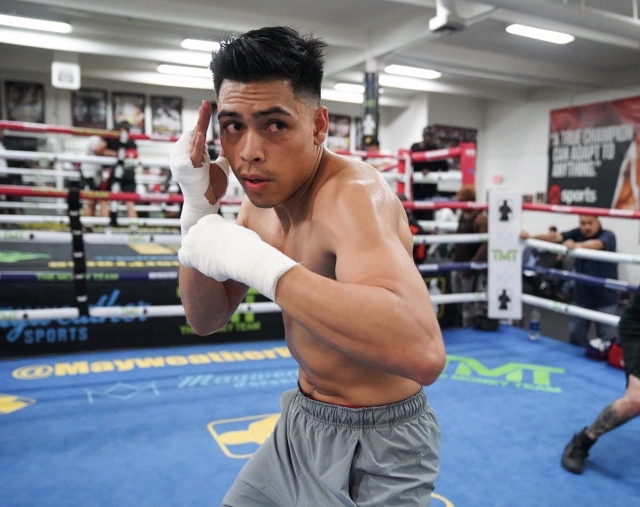 He was also asked to rate the fighters in his weight class.

"The top guys in my weight class - I would have to say the world champions. You got (Rey)Vargas, you got Murodjon (Akhmadaliev) who has unified the titles - the IBF and WBA - and you also have Emanuel Navarette, so those guys are probably the top guys in the division and I am looking forward to fighting any of the three," Leo revealed.

Ellerbe chimed in afterwards with what opponents he has in mind for Leo after the coronavirus pandemic subsides.

"I was very impressed with the kid from Uzbekistan who beat Danny Roman. Danny Roman is also another solid fighter. Thompson Boxing has done a great job brining him up. Those are fights we would definitely love to make. Either with the unified champion, Danny Roman, I am very impressed with the kid out of Philly, Stephen Fulton, he has tremendous skills. All of those are excellent fights that I think are great challenges for you and those are the kind of fights we are looking to make," said Ellerbe.

Well for one, he needs to realize there are crooks in the division. Just ask Daniel Roman. That Uzbek got a gift after being schooled by Roman. Then again we should have known that was coming when the homer Manix…

Like the look of Leo from what I've seen, Vs any of those opponents would be must see fights