The two boxers were trading punches in just about every round. Vargas had the edge and was landing better. Bisbal was warned for low blows and other infractions as the fight played, including two points being taken away. In the eight, a bad low blow was landed by Bisbal and the referee Mike Ortega had seen enough and issued the DQ call.

Newly signed to Top Rank, lightweight Abraham Nova (18-0, 14KOs) stopped Pedro Navarrete (30-25) in the fourth round. Navarrete went down numerous times in the fight. The referee waved it off in the fourth, when Navarrete got up and appeared to be on very unsteady legs.

Guzman dropped Montoya with hard punches in the first. Montoya landed a vicious hook in round two to drop Guzman, who was in serious trouble when he got up - but the bell rang before Montoya could follow up.

In the third, they were trading heavy shots when a hook to the liver sent Montoya down for the full count.

In a battle of world title challengers, featherweight Christopher Diaz (25-2, 16 KOs) bounced back from a decision loss to Shakur Stevenson.

He won an eight round unanimous decision over Adeilson Dos Santos (19-8). All three judges scored it 80-72.

Diaz landed the better punches, controlled the tempo and was dictating the entire pace of the fight. Dos Santos was mostly defensive and not active enough to get Diaz's respect.

Heavyweight prospect Jared Anderson (3-0, 3 KOs) demolished Andrew Satterfield (5-4) in the first round. Anderson dropped him with a body shot, and then leveled him with a combination of punches, sending Satterfield down for the full count. 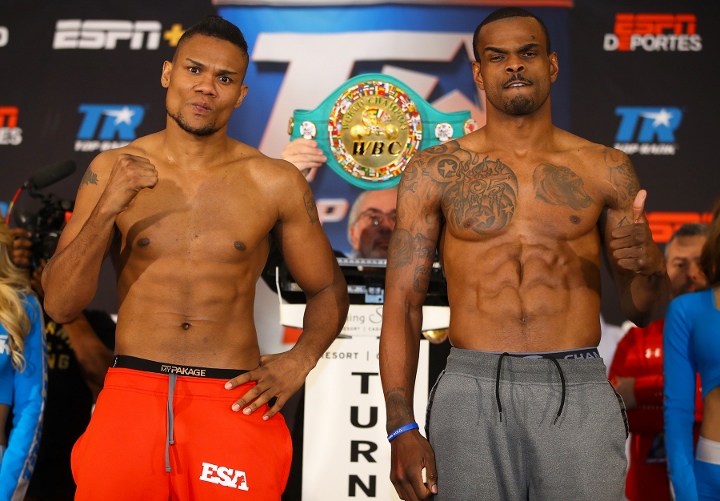