Efe Ajagba: Excited To Be Back Again Doing What I Love

Efe Ajagba can’t predict what it will feel like to be in the ring following the longest inactive stretch of his young career. All he knows is that he will finally return home.

“This is boxing, this is my life,” Ajagba told BoxingScene.com ahead of his upcoming fight versus Jonathan Rice, which takes place this Saturday live on ESPN+ from The Bubble in Las Vegas. “I’m excited to be back again doing what I love.”

The fight will be his first since March, which served as his last while affiliated with Premier Boxing Champions (PBC). Coming out of the ongoing coronavirus pandemic, Ajagba returns armed with an entirely new team in tow. The 2016 Nigerian Olympian—now based out of the greater Houston area—signed a promotional deal with Top Rank earlier this summer, coming shortly after inking an advisory pact with powerful boxing manager James Prince.  With the move also came a switch from previous head trainer Ronnie Shields to new coach Kay Koroma. 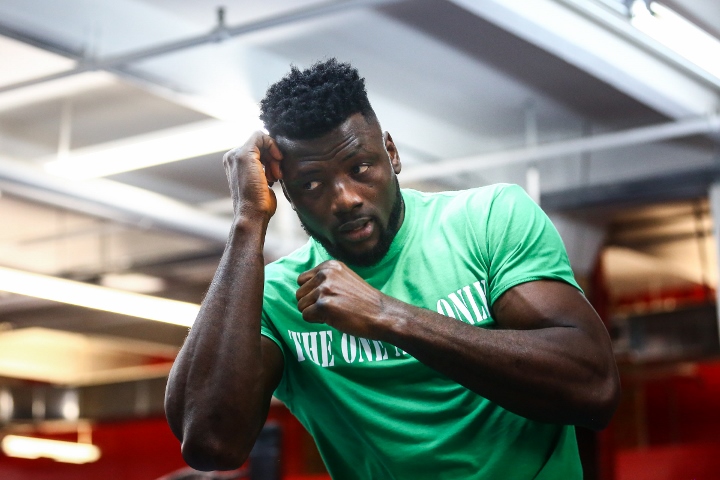 All that was missing to commemorate the moment was a fight date, which now comes this weekend. The six months between fights is the longest he has been out of the ring as a pro. His previous three outings have all aired live on Fox, including a thrilling 5th round knockout of Iago Kiladze in their heavyweight slugfest last December which saw both fighters hit the deck and draw the fans in attendance out of their seats for much of the night.

As it relates to this weekend’s fight, that is the only aspect that he will have to continue to miss.

“The only disappointment is that my (first) fight will not have fans in attendance,” admits Ajagba, who is coming off of a 9th round knockout of Razvan Cojanu this past March in Brooklyn. “I really feed off of the fans, they motivate me and give me energy in the ring.

“But of course, this is what it takes to fight (these days), so I will be ready. And the fans not being in attendance, means that they will be watching at home. They will be pleased with what they see this weekend.”

[QUOTE=SN!PER;20766687]Watch out for Raphael Akpejiori, another big Nigerian who's come to America for some good fights.[/QUOTE] That guy has terrible balance and is wide open to get clocked , he was getting wobbled by a short fat journey man a…

Watch out for Raphael Akpejiori, another big Nigerian who's come to America for some good fights.

"Excited to be back again, doing what I love" yes you love to KO bums

Beat of luck young man, looking forward to seeing you fight again in ESPN or the ESPN+ app!