Eddie Hearn Reflects On His First Year With DAZN

Expansion into the United States has been harder than Eddie Hearn anticipated, but a year after the first show of his deal with DAZN he insists that he has not spend his way through his budget and there would be no let-up in their battle with Top Rank and PBC.

Matchroom’s first show with DAZN was in Chicago last October with a bill featuring Artur Beterbiev, Jessie Vargas, Daniel Roman and Jarrell Miller. But Hearn says he was taken aback by how hard rival companies and networks were willing to go in the battle to sign fighters, saying he has been forced to overpay.

“It has been madness,” Hearn said. “It is a year of my life that I will never get back, it has probably aged me about 20 years. There has been a crazy amount of travelling, but what an opportunity to build a stable? When you look at our stable right now, you don’t see any other close to competing.

“It has been harder than I thought it would have been. ESPN and PBC have dug their heels in and we’ve had to overpay fighters to come to us or stay with us.” 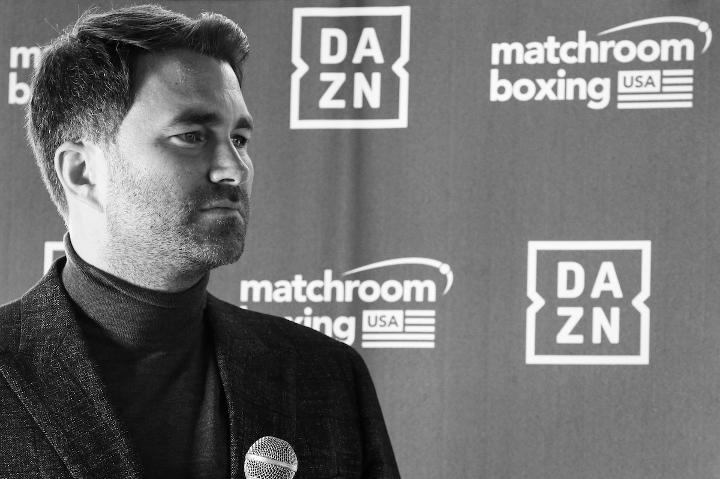 Hearn admits that in the early days there was a lot of flying by the seat of his pants as he looked to invest DAZN’s cash.

“We came in with a load of money and I just expected loads of people to just sign for us,” he said.

“But I haven’t wasted it, I haven’t spent the money, in year one we were not in the right spots to spend the money. I’m not just going to go in and go crash, bang, wallop, waste, waste, waste. We are going to strategically do things.

“So when DAZN got Canelo on board that was a big moment, then Golovkin came on board. We have Ruiz AJ in December, Canelo-Kovalev and other big fights that are being announced, so the schedule is really unrivalled.

“But with Gennady Golovkin and Mikey Garcia wanting to sign, as well as having another couple of top, top names we are slowly, every day, reinforcing the quality of what we are doing on our platform.”

As well as in the US, Hearn has expanded into Mexico and Italy, bankrolled by DAZN, with moves into Spain coming soon and Germany as well. But he claims that fighters’ fears about becoming invisible by boxing on DAZN have not been borne out

“There’s been a negativity that other people are fuelling and feeding into people’s brains, people saying ‘that won’t last two months, they’ll be gone in six months’,” Hearn said. “Well, we’re a year in, we’re still here and [DAZN] want to be more aggressive and spend more money than ever.

“The downside has been the lack of brand power, because of the launch of DAZN in the US compared to ESPN, or Fox or Showtime. They are coming from a standing start and trying to convince people, but the subscriptions are slowly increasing to a level where our viewing figures are not far off Showtime’s viewing figures.

“That’s another thing people told fighters ‘no one is watching’. More people watched AJ-Ruiz on DAZN than watched him for his last fight on Showtime (Parker).

“Canelo is now continuously adding subscriptions and we are not getting a massive churn, people are buying for the year. If you are willing to spend $80-$90 on one pay-per-view, how can you not be willing to buy a year of DAZN for $99. “

Hearn’s father, Barry, described the bidding war between DAZN, ESPN and PBC as a “three-way fight to the death” recently, but Eddie says DAZN will not be backing out anytime soon.

But as hard as it has been, Hearn says he would not swap the past 12 months for anything.

“One of the highlights was MSG (Joshua-Ruiz), which didn’t go our way but will always be one of the great heavyweight nights and one of the biggest heavyweight shocks,” he said. “There have been plenty of great fights, Estrada v Rungvisai, Roman v TJ Doheny, signing fighters like Bivol, Usyk, Andrade, Hooker and Tevin Farmer.

“The show we did in Mexico recently was like nothing I had ever seen before. There were 12,000 people there, for Estrada. When you look at it, I think it has gone really well.”

I dig Eddie overall & liked what he did in the UK, but hes not doing well in the US & idk that he looks like he can do well anytime soon. DAZN would be better rep'd in the US…

[QUOTE=R_Walken;20111964]1 Year in , DAZn has done Ok First 6 months was sh.it but the next 2 months are heating up and I’m finally going to purchase the App , originally was going to sign up for the GGg/Sevre fight…

Its failing miserably in America..in the boxing capital of the world I finally met a person with DAZN They had to restructure The fee amounts because they were sinking fast..in addition They had to sell off inventory to survive If…