The unbeaten IBF lightweight champion satisfied his hometown fans by knocking down Cruz once apiece in the 10th, 11th and 12th rounds at Huntington Center in Toledo, Ohio. The 26-year-old Easter (19-0, 14 KOs), fighting in his hometown for the first time as a pro, methodically broke down his extremely game challenger on his way to easily winning a unanimous decision. 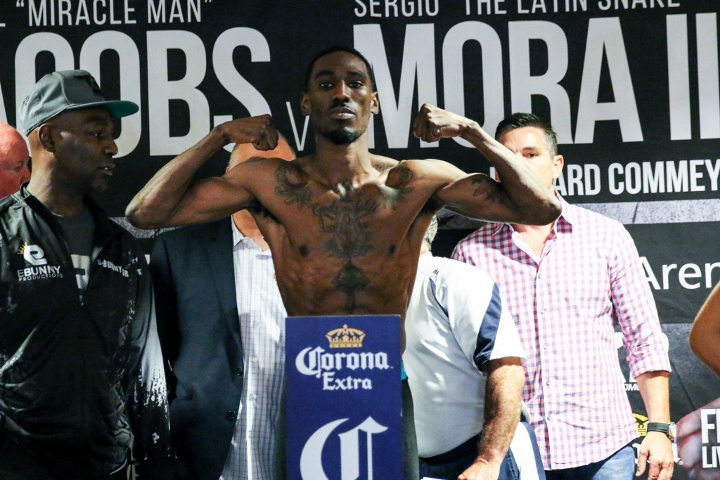 Easter’s straight right hand knocked Cruz silly late in the 11th round. A disoriented Cruz went down for the second time in the fight from that punch.

He stayed on one knee until the count of eight, but got to his feet in time. The bell to end the round saved Cruz before the action resumed.

Intent to close the show, Easter attacked Cruz to start the 12th round. He dropped Cruz for the third time in as many rounds with a straight right hand, only to have Cruz reach his feet yet again and make it to the final bell.

A straight right hand by Easter floored Cruz about 10 seconds into the 10th round. A courageous Cruz got to his feet and, with blood flowing from a cut around his right eye, tried to battle back.

Easter seemed to buzz Cruz toward the end of the 10th round as well, but Cruz managed to survive the round.

Puerto Rico’s Cruz (22-5-1, 16 KOs) was a huge underdog, an optional opponent Easter was expected to defeat easily in his first title defense.

Despite disadvantages in size, speed and power, Cruz had some success in the fifth round. He connected with a flush right hand to Easter’s chin late in that round, but Easter started the sixth round strong.

Easter hit Cruz with a left hook early in the sixth round that set the tone for the rest of those three minutes. Later in the sixth, Easter drilled Cruz with a straight right hand that snapped back Cruz’s head.

An aggressive Easter assaulted Cruz to start the seventh round as well. Cruz withstood that threat, too, and was throwing hard punches of his own right up until the round ended.

Easter won his 135-pound title in thrilling fashion September 9 in Reading, Pennsylvania. He beat Ghana’s Richard Commey by split decision that night in a 12-rounder that featured numerous entertaining exchanges.

Commey (24-2, 22 KOs) was undefeated when he encountered Easter and had knocked out 92 percent of his opponents.

[QUOTE=OctoberRed;17417984]Fights are strange sometimes. Bundu goes twelve with Thurman, who is a big puncher, but gets demolished by Spence.[/QUOTE] I don't agree with your theory, because although we know Thurman has power he doesn't appear to be as heavy handed…

Garcia and Linares.....make it happen

Shafikov has a good shot at taking that title

[QUOTE=RomanReigns;17418199]Spence is a good talent. if he beat Brook. I can see him become an undisputed Welterweight Champion by the end of the year.[/QUOTE] I think Spence vs Thurman will be the fight at 147. I want to see how…