Nothing about Sergey Kovalev’s two losses to Andre Ward has changed his promoter’s mind about the Russian knockout artist’s status.

Now that Andre Ward has retired, Kathy Duva thinks Kovalev is, without question, the best light heavyweight in boxing. She expects the former champion to start proving her right Saturday night in New York, where Kovalev (30-2-1, 26 KOs) will encounter Ukraine’s Vyacheslav Shabranskyy (19-1, 16 KOs) for the WBO 175-pound championship Ward gave up when he retired.

The 34-year-old Kovalev is heavily favored to beat Shabranskyy in The Theater at Madison Square Garden (HBO; 10 p.m. ET), but Kovalev’s critics consider him more vulnerable after what happened during his rematch with Ward. While the stoppage was questionable because Ward landed punches below Kovalev’s belt line just before referee Tony Weeks ended the bout, Ward hurt Kovalev with a right hand earlier in the eighth round and had affected him with legal body blows. 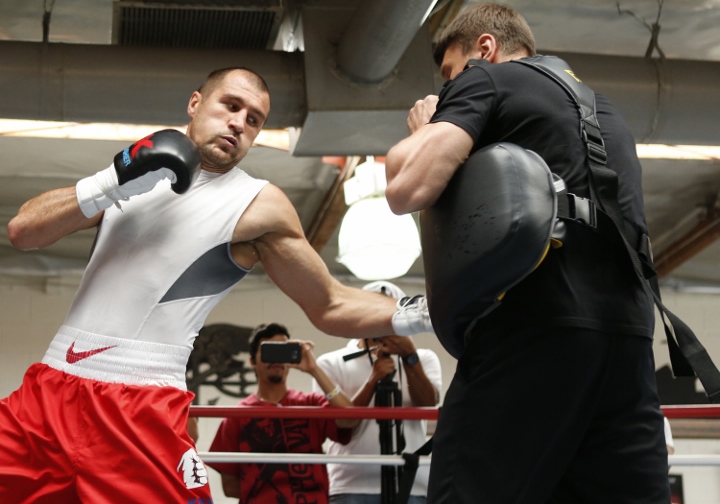 His fight against Shabranskyy will be Kovalev’s first action since Ward defeated him June 17 in Las Vegas.

“Sergey was the guy who was nobody, who was coming up and trying to make something of himself. Now, after all that’s happened, what happened in those Ward fights didn’t change the fact that, at this moment, Sergey is the top man in his division. He’s the man to beat. Clearly, he’s gotta win the fight on Saturday to kind of put a stamp on that. But that is really the position he’s in right now.”

“I don’t think that those are the kinds of losses that diminish you,” Duva said. “One was clearly not even a loss. The other one was questionable at best in the stoppage against, again, the best fighter in the world. Close losses to that guy doesn’t put you that far behind him. And the fact is, at this moment in the division, there’s no one else [other than Kovalev] that you’d have to say everyone else has to go through to prove he’s the best. Stevenson is irrelevant and no one is gonna claim that Beterbiev or Bivol is the man in the division unless they beat Sergey Kovalev. So he’s in a good position. He’s positioned really well right now and we’re extremely happy about it.”

[QUOTE=MDPopescu;18232490]... :) I only said that he was acting in a disciplined manner in the ring -- he was doing fine vs Ward until his poor stamina (caused by drinking) showed up... unfortunately, alcoholic fighters never come back -- I…

[QUOTE=MDPopescu] ... The guy is very sound and disciplined in the ring... but those dramatic stamina issues were dued to vodka, for sure... [/QUOTE] [QUOTE=LetOutTheCage;18232455]He cant be that disciplined if he constantly drinking vodka in training camps.[/QUOTE] ... :) I…

[QUOTE=MDPopescu;18232435]... The guy is very sound and [B]disciplined in the ring.[/B].. but those dramatic stamina issues were dued to vodka, for sure...[/QUOTE] He cant be that disciplined if he constantly drinking vodka in training camps.

[QUOTE=LetOutTheCage;18232428]Vodka and a lack of discipline[/QUOTE] ... The guy is very sound and disciplined in the ring... but those dramatic stamina issues were dued to vodka, for sure...