The 10 round bout will take place at the Trump Taj Mahal in Atlantic City, N.J. The vacant USBA welterweight title will be on the line.

Rising Star Promotions, which represents Lamanna, will promote the card. Hernandez-Harrison is promoted by Roc Nation. 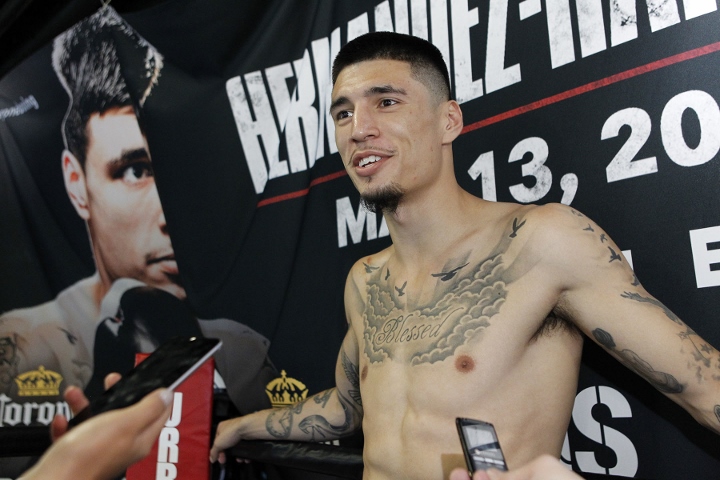 The bout features two young fighters from the East Coast who know each other well, having sparred on occasion over the last couple of years. Hernandez-Harrison is 22 years of age, while LaManna is 24.

Hernandez-Harrison (29-0-1, 16 KOs) has built a significant following in the Washington, D.C. area, where he resides.

In his last bout on May 13, he fought to a 10 round split decision draw against Mike Dallas, a fight some media and fans thought Dallas did enough to win.

"As long as you learn and move forward, that's the most important thing," Hernandez-Harrison told Boxingscene.com on Wednesday.

Hernandez-Harrison, who was used for sparring earlier this year by Saul 'Canelo' Alvarez in preparation of the Amir Khan fight, made his pro debut three weeks after his 17th birthday.

Lamanna (21-1, 9 KOs) resides in nearby Millville and figures to have a partisan crowd in his favor on September 16.

In his last bout on July 22, Lamanna stopped Engleberto Valenzuela in the first round in Atlantic City.

Lamanna has won his last five bouts since his only loss suffered at the hands of Antoine Douglas in March of last year.

As compelling as the fight is between Hernandez-Harrison and Lamanna, the fight card will reportedly not be televised. Promoter Debra Lamanna advised Boxingscene an announcement will be made shortly on the rest of the card.

Cornflake is going to take him to school.

Cornflake is about to make Dusty into Shredded Wheat!

Hand me some milk because we got Cornflake!