Dusty Harrison Knocks Out Fred Jenkins in Fourth Round

Harrison was returning to the ring after stopping Bruce Rumbolz in the opening round on Mar. 30 in New Albany, Indiana. It was Harrison’s first fight in two-and-a-half years.

The 24-year-old Harrison was the more-effective fighter of the two, throwing and landing several combinations to Jenkins’ head. The shorter Jenkins was forced to fight defensively with each passing round. 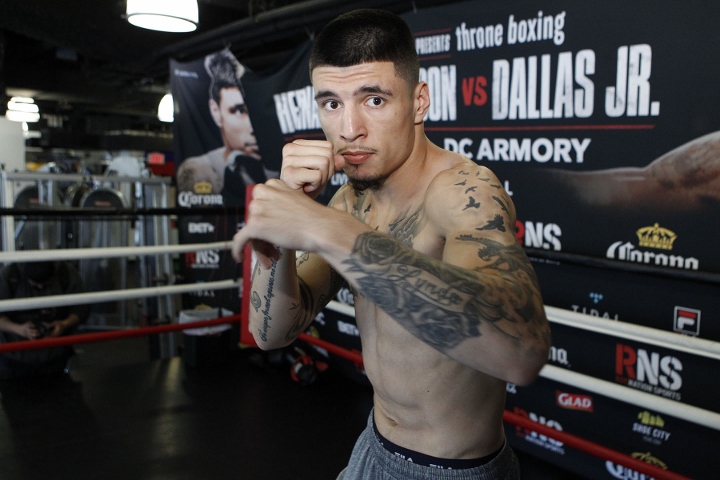 With about a minute left in round four, Harrison landed a right hand that stunned Jenkins. Harrison followed up with a barrage of punches, dropping Jenkins to the canvas. Referee Dave Braslow counted Jenkins out at 2:17.

Harrison, who resides in Washington, D.C. and has a significant following in the area, improves to 32-0-1, 18 knockouts.

Harrison, who was signed to Roc Nation until he was released from his promotional contract in June, signed a promotional deal with Lee Baxter Promotions in December. Harrison hopes he is able to return to the ring as soon as possible.

“I felt really good and strong,” Harrison told Boxingscene Sunday afternoon. “I stayed very patient. I was happy to get good rounds in. It was a pleasure being in the ring with Fred, who is a true professional.

Harrison is eyeing a return to the ring in May, attempting to inch his way down in weight. In the Rumbolz fight, Harrison weighed 170 pounds. He weighed 163 pounds for Saturday’s fight.

Jenkins, who resides in Philadelphia, falls to 10-6, 3 KOs and has lost five of his last six bouts.

Heavyweight Mike Balogun of nearby Upper Marlboro improved to 13-0, 10 KOs with a technical knockout of Toledo’s Marquis Valentine (5-6, 2 KOs) at 2:49 of the sixth and final round.

In cruiserweight action, Joe Jones stopped Montez Brown (8-1, 6 KOs) of Virginia Beach, Virginia at 1:01 of the opening round. Jones, who resides in Leesburg, Virginia, improves to 10-1, 8 KOs.

Lightweight Roger Belch of North Carolina defeated Darel Harris (1-12-1, 1 KO) by unanimous decision over six rounds. All three judges scored the bout 59-55 in favor of Belch, who improves to 13-1, 8 KOs.

The card was promoted by KBW Promotions.

[QUOTE=Bigchip;19683108]He has some serious legal issues he has to face.[/QUOTE] Yeah, I think that was the cause of his previous hiatus and from what I've heard he will probably be taking another hiatus in the future for similar reasons.

He has some serious legal issues he has to face.

Dusty has been pro for 8 years now. It's time to step it up.

Their names make it sound like an article from the 50's