Daniel Dubois didn’t just predict that he’ll knock out Joe Joyce when they sat across a table from one another recently.

The emerging English heavyweight promised Joyce that he’ll ruin his career Saturday night at Church House in London. After joking Joyce will need a sleeping bag for when he gets knocked cold, Dubois suggested that his huge, hard-hitting opponent won’t be the same once Dubois defeats him.

Dubois (15-0, 14 KOs) and Joyce (11-0, 10 KOs) talked trash throughout BT Sport’s “Face Off: Daniel Dubois vs. Joe Joyce,” a promotional program that premiered recently on the network and its YouTube channel. 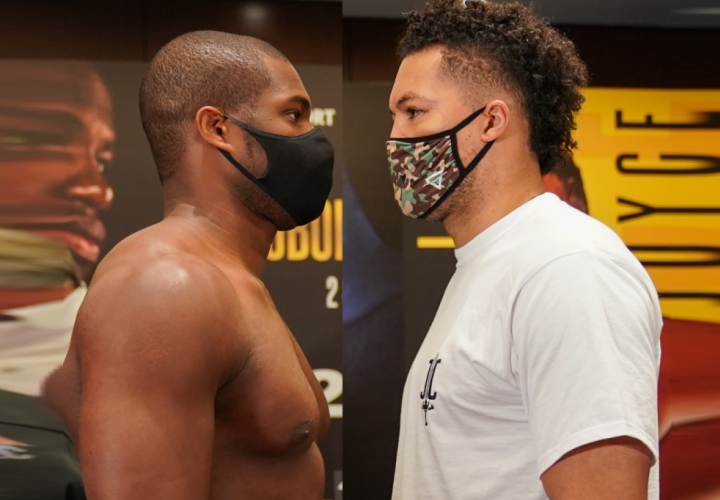 The 35-year-old Joyce believes his vast experience as an amateur and pro will separate him from the 23-year-old Dubois. They’ll fight for Dubois’ British Boxing Board of Control title and four other regional championships in a main event BT Sport 1 will televise in the United Kingdom (7:30 p.m. GMT) and ESPN+ will stream in the United States (5 p.m. EST; 2 p.m. PST).

Joyce believes he’ll prove Dubois made a mistake in accepting this dangerous bout “when he gets knocked out and flattened in the later rounds.” The 2016 Olympic silver medalist also admitted this is a real risk for both boxers, when they could’ve pursued easier fights.

“I think it’s like equally [risky],” Joyce said. “It’s like no risk, no reward. From both sides, it’s roughly the same. It’s a 50-50 fight. I obviously think I’m gonna win. Daniel obviously thinks he’s gonna win. It’s gonna be an explosive fight. There’s gonna be punches traded. You know, someone’s gonna go down by the end of the night, and then someone’s gonna have their hand raised. And that’s probably gonna be me.”

[QUOTE=Caught Square;20914714]He shut me up tonight that’s for sure. Gotta give credit where it’s due as he impressed me more in this fight than ever before as a pro.[/QUOTE] To be honest I’m completely shocked too my man. Never thought…

[QUOTE=Boxingfanatic75;20914505]Appears he is going to take a crack at the title next.[/QUOTE] He shut me up tonight that’s for sure. Gotta give credit where it’s due as he impressed me more in this fight than ever before as a pro.