Dorticos: I Came Back To WBSS To Win It All

Among the concerns heading into the second season of the World Boxing Super Series tournament was the staging of another cruiserweight eight-man set when its predecessor already crowned an active divisional king.

It’s beginning to appear more likely that a new king will be crowned by tournament’s end, which works just fine for returning former titlist Yunier Dorticos.

“I came back win it all, no matter what’s at stake,” Dorticos told BoxingScene.com through a translator ahead of his June 15 semifinals showdown versus Andrew Tabiti (17-0, 13KOs) in Riga, Latvia. “The goal was to win the tournament and prove that I am the best cruiserweight in the world no matter who I had to face during or afterward—Tabiti, (Mairis) Briedis, (Krzysztof) Glowacki, (season one winner Oleksandr) Usyk or whoever.” 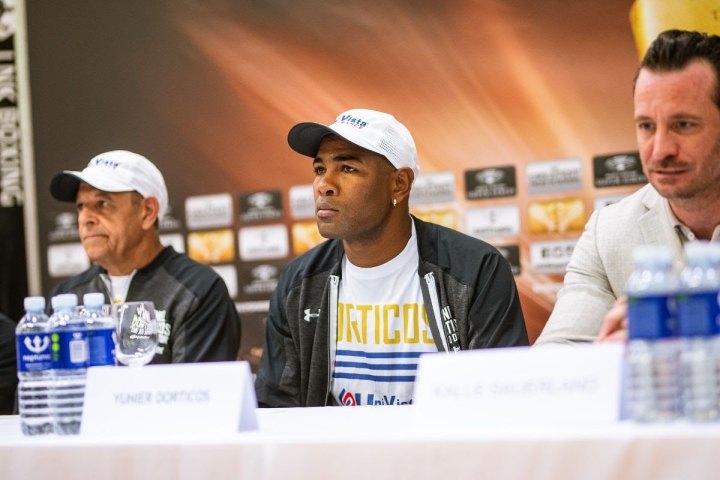 Usyk’s running of the WBSS cruiserweight tables a year ago netted him the World cruiserweight championship, having to go through a field of unbeaten titlists to reach that point. The lone titlist to not face the undefeated Ukranian and eventual 2018 Fighter of the Year was Dorticos (23-1, 21KOs), who suffered his lone career defeat with a 12th round stoppage at the hands of Murat Gassiev in their semifinals clash last February.

Gassiev advanced to the finals, only be manhandled by Usyk last July. Both are now campaigning as heavyweights, despite having yet to formally debut in the division.

Usyk was due to fight at the new weight on May 25 but had to withdraw from his planned showdown versus former title challenger Carlos Takam due to suffering a torn biceps injury. The plan is still to make a heavyweight run, which motivated his decision to relinquish his  World Boxing Association (WBA) “Super” cruiserweight title earlier this year.

Another divisional development came along in the first week of June. The unbeaten Ukranian has now been downgraded to “Champion In Recess” by the World Boxing Council (WBC), while the World Boxing Organization (WBO) has promoted Glowacki from “interim” to “full titlist ahead of his now classifled mandatory defense versus Briedis.

Suddenly, two semifinais bouts with little more than interim titles at stake have now created a scenario where the winners are vying for unified title status in the finals. It only sweetens the pot, as Dorticos’ focus remains on the unbeaten opponent in front of him.

“Right now, everything I’ve been working on and thinking about has been dedicated to knocking Tabiti out,” insists Dorticos, whom advanced to the semifinals with a 12-round decision win over Mateusz Masternak in their non-stop thriller last October in Orlando, Fla.

The shootout was in stark contrast to Tabiti’s tournament advancement, overcoming a pedestrian effort from Russia’s Ruslan Fayfer to claim a hard-earned decision win on the road last November.

“We both did what we had to do, to get to the (semifinals),” notes Dorticos. “This guy is undefeated and I expect him to come try to rip my head off. Because that’s what I’m gonna do to him and anyone else in my way to the finals and the titles.

“If they want to add more titles to the mix, I'll take whatever they're willing to put up.”

The winners of the June 15 doubleheader will meet later this year, with the date and location of the cruiserweight finals to be determined.

[QUOTE=Ajvar;19830351]I pick Tabiti because Dorticoz was throwing One-Two all 12 rounds without any profit against Gassiev + he is older now and in worse shape.[/QUOTE] I'll take Dorticos. Tabiti is a little too hesitant.

[QUOTE=Ajvar;19830351]I pick Tabiti because Dorticoz was throwing One-Two all 12 rounds without any profit against Gassiev + he is older now and in worse shape.[/QUOTE] How do you now he is in worse shape? He doesnt look in worse shape…

I pick Tabiti because Dorticoz was throwing One-Two all 12 rounds without any profit against Gassiev + he is older now and in worse shape.