Nonito Donaire may well have lost in Belfast recently –– but he’s ready to return there before the year is out.

The former four-weight world champion was outpointed by Carl Frampton on April 21 at the SSE Arena in the city.

Donaire was on the wrong end of a trio of 117-111 cards at the end of 12 rounds as Frampton set up a showdown at Windsor Park on August 18, exclusively live on BT Sport. 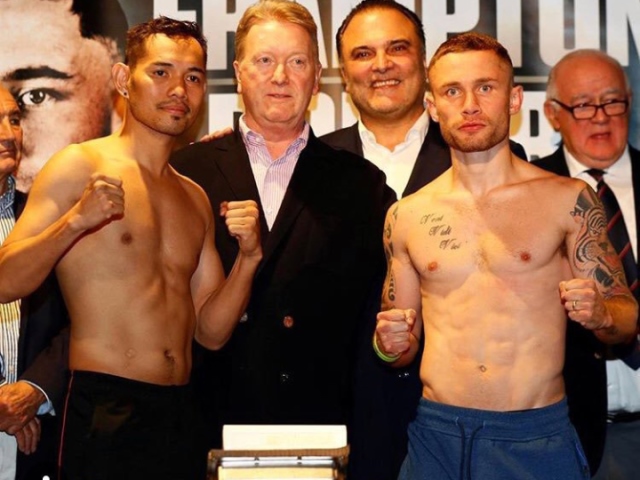 Not only did the victory set up a stadium fight for ‘The Jackal’, it also earned him the vacant WBO interim world title at featherweight.

“I think he’s still on top of the division,” Donaire said of Frampton to UTV. “When he lost to [Leo] Santa Cruz, it wasn’t like he got dominated, he was not.

“I believe he’s still on top and what he showed me inside that ring was a guy who can change at any moment in time when he has to, he can box, he can fight, whatever he’s got for Windsor Park I support him.”

And Donaire would like a spot on the undercard of Frampton’s big night –– which Boxing Scene understands is pencilled in for August 18 –– and would be cheering for his former foe if another shot at global honours was at the top of the card on the night.

“I would love to fight on the undercard,” said the Filipino, who is set to move back down to super bantamweight for a second time.

“It’s one thing to be sharing the top spot and fighting someone on top of the bill, but again to have a future Hall of Famer on the undercard, that’s another thing,” he said.

“When we were in the ring our fists were talking, but there was a lot of great respect. When we came out, we had a conversation and there was an instant kind of friend-for-life kind of thing.

“I’m like everyone else in Belfast who has taken a real shine to Nonito.”

[QUOTE=BLASTER1;18732186]Im pretty sure Wilder has signed up and does it plus a cpl of others that i just cant think of atm.[/QUOTE] does wilder do out of season though? i didnt think so but could be wrong.

[QUOTE=u122564;18731943]ilikebiketython - youre spot on. i think you left out the fact that hes possibly the only fighter that does 24/7 365 days a year random testing with VADA. i dont think any other boxer does it other than when…

Donaire will start to sell his ass for lumpia crumbs

[QUOTE=Pinoy4ever;18729434]Nonito Donaire should retire now, he has done a lot in boxing but time is now![/QUOTE] He has done alot in boxing? Lol like what?