Dirrell: 'Flint Strong' Is Us Sticking Together As A City, As A Whole

At age 34 and having boxed—pro and amateur—for nearly a quarter-century, Anthony Dirrell readily admits that there aren’t many years left in his boxing career. (photo by Ryan Hafey)

Where he’ll never quit fighting, however, is in the ongoing battle to forever better the lives of those in his hometown of Flint, Mich.

The reigning super middleweight titlist is among a handful of high-profile athletes who continue to put the city first—particularly its ongoing water crisis which has been an issue for five years and counting—whether entering a boxing ring, football field or basketball court. It’s a status he carries as proudly as—if not more so than—his title status ahead of his Sept. 28 showdown versus unbeaten David Benavidez (21-0, 18KOs).

“Flint Strong is, we're all a city, we are all one,” Dirrell (33-1-1, 24KOs) explained of the ongoing movement during a recent media conference call to discuss his clash with Benavidez, which airs live on Fox Sports Pay-Per-View from Staples Center in Los Angeles, Calif. “We all support each other.” 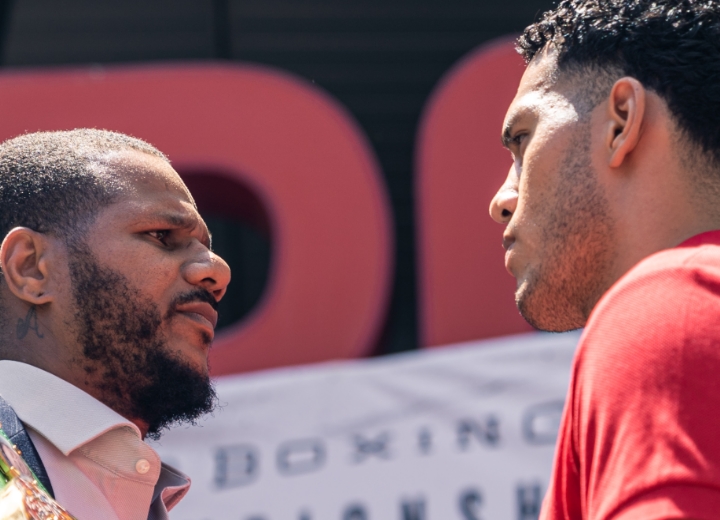 Dirrell and his older brother Andre—both of whom served on the 2004 U.S. Olympic boxing team which competed in Athens, Greece—have long been at the frontline in demanding better quality of life for Flint, which has been under an emergency water crisis since 2014 when switching its supply from Lake Huron to Flint River.

Michigan’s enacted Lead and Copper Rule in 2018 leave the state with the strictest water standards and perhaps the most closely monitored in the United States, Still, old issues still linger regardless of any amount of testing data provided in attempting to claim it’s no longer the crisis it once was.

The city’s most prominent athletes continue to band together to restore hope for its community.

Days after becoming the undisputed middleweight champion with a 10-round wipeout of Christian Hammer, two-time Olympic Gold medalist Claressa Shields participated in a local “Pack Your Back” drive which donated more than 40 pallets worth of bottled water to Flint citizens.

“We can be something, just because we’re from Flint, high murder rate, the dirty water and everything, we are still fighting people,” Shields told the local NBC affiliate at the time. “When I get in the ring and fight, it’s not just for me, it’s for them too.”

Shields (9-0, 2KOs) returns to her hometown for his next bout, an Oct. 5 showdown versus Croatia’s Ivana Habazin (20-3, 7KOs) in hopes of becoming a three-division titlist with the fight taking place at 154 pounds.

One week prior, Dirrell looks to make the first defense of his second reign as a 168-pound titlist in facing Benavidez, who at 22 is 12 years his junior and entering the prime of his boxing career. The bout comes in supporting capacity to a welterweight unification clash between Errol Spence and Shawn Porter, and taking more than 2,000 miles from Dirrell’s hometown.

Every day he trains and all the way through fight night and beyond, though, there’s no questioning where his heart lies and whom he proudly represents.

“You got a lot of people from Flint,” notes Dirrell. “I can sit here and name people all day. Kyle Kuzma is from Flint. You got JaVale McGee from Flint (both Kuzma and McGee play for the NBA’s Los Angeles Lakers). You got Monté Morris (Denver Nuggets) from Flint.

“You got a lot of these athletes that are repping Flint. If you look at any one of their tattoos, I bet they have Flint on one of them. It’s just us sticking together as a city as a whole and trying to make us better.”

[QUOTE=Boxing Goat;20078241][I]Ok, so you're now admitting that democrats are leftists. [B]Great[/B][/I]. Antifa is the left, therefore democratic thinking = Antifa, which was my point and there is no disputing it. Parties who believe in violence and stand against freedom of…

I kinda liked all the political talk . Better than the usual " insert boxer name is " ... ducking , a bum , with the wrong promotional company crap.

[QUOTE=The D3vil;20077495]Wrong. [B]Democrats did not equal left until a few decades ago[/B].. The Democrats & Republicans have switched sides multiple time. [url]https://www.livescience.com/34241-democratic-republican-parties-switch-platforms.html[/url][/QUOTE] [I]Ok, so you're now admitting that democrats are leftists. [B]Great[/B][/I]. Antifa is the left, therefore democratic thinking =…

[QUOTE=Boxing Goat;20076329]Left = democrats , far left = still fkn democrat! KKK was democrats Antifa are democrats In fact, they are being fascists themselves while protesting others free speech and are even too fkn stupid to understand that! It's just…

If Claressa Shields can make it out Flint, so can the Dirrell brothers.