by Per Ake Persson

The German Federation - the BDB - have acted upon an official protest from EC Boxing and heavyweight Alexander Dimitrenko - and changed the result in the fight Dimitrenko (41-3, 26 KOs) had against Miljan Rovcanin (18-1) on December 22 in Hamburg.

The outcome was changed from a draw to a win for Dimitrenko - and now Rovcanin suffers his first career defeat.

The reason for the change is that Rovcanin had a total of three points deducted - two in the third and one in the seventh during the fight - and according with the BDB rules he should have been disqualified in the seventh when the third point deduction was made.

It´s an important win for Dimitrenko, who is mandatory challenger for the EBU title held by fellow German Agit Kabayel. 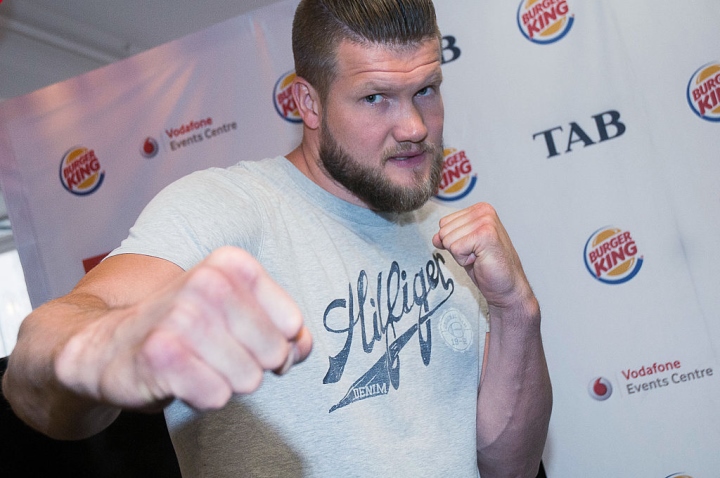 IN OTHER NEWS: Boston Boxing Promotions has announced another fight for its event Saturday January 27, 2018 at the Castleton Banquet and Conference Center as Boston's Julio Perez Campusano will make his pro debut against New York veteran Borngod Washington in a four-round light-heavyweight fight.

Campusano is a former nationally ranked amateur who was a finalist in Olympic qualifying tournaments. Now, he is leaving the amateurs behind and entering the professional ranks in hopes of someday competing for a world title.

Borngod Washington is a journeyman from Queens, New York who has at times during his career been trained by former world champion Junior Jones. He is currently being trained by retired heavyweight Darrel Madison who finished his career with a stellar record of 16-1, 4 KO's. He is probably best known for his shock KO defeat of the previously undefeated Ricky Dawson in front of his hometown crowd in Connecticut in 2011.

The January 27 boxing event will be presented by Boston Boxing Promotions. Ringside tickets are $60 and general admission tickets are $40 and are on sale now at www.BoxingNH.com. Fans are urged to purchase tickets early due to limited availability. Additional bouts to be announced in the weeks to come.

[QUOTE=ESAU;18394662]If I'm not mistaken, didn't Dimitrenko recently beat somebody he was heavily favored not to? At this point, he's basically a journeyman - a good opponent to give an up and comer experience, especially against a taller guy.. Or a…

[QUOTE=KillaCamNZ;18394741]Sums it up. I lost a lot of respect for him after the acting up he did in the Parker fight - he didn't want to be in the ring at all, then cried and complained afterwards. At this stage,…

Dimitrenko is a cry baby, has no heart and will lose his next fight by KO

[QUOTE=joe strong;18393636]That was a terrible performance by Dimitrenko regardless of the result. The ref was even annoyed by Dimitrenko & his dive he took after getting barely tapped after a break was called. He went down like he got shot…

[QUOTE=joe strong;18393636]That was a terrible performance by Dimitrenko regardless of the result. The ref was even annoyed by Dimitrenko & his dive he took after getting barely tapped after a break was called. He went down like he got shot…