Dillian Whyte Unlikely To Box Until Being Cleared, Says Hearn

Dillian Whyte is unlikely to box in the UK until he has been cleared of the drug testing controversy surrounding him, despite having been given the all clear to box by UK Anti-Doping (UKAD).

A cloud has hung over the heavyweight since it was revealed that a test carried out by UKAD on June 17 showed adverse findings with respect to two metabolites of a banned substance. The result of the test was revealed to Whyte three days before his July 26 fight with Oscar Rivas, although Rivas was never informed of the test findings.

An initial UKAD panel, which met on the morning of the fight, cleared Whyte to box and that remains the situation. But he still faces a full hearing, where his future would be decided. 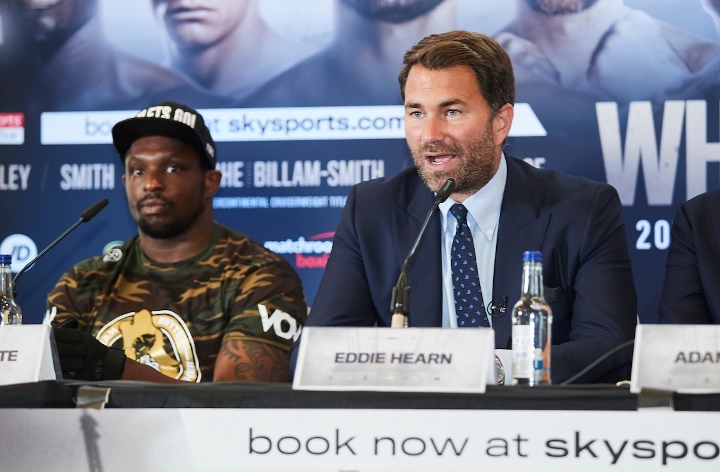 With UKAD operating under strict confidentiality, very few details of the case have been revealed. It is not even known whether Whyte has requested the B sample from his June 17 test to be checked.

However, Eddie Hearn, his promoter, stated that Whyte has a hearing in October where Whyte expects to clear his name. Hearn also said that, in his opinion, Whyte should not box again until he was cleared.

“I believe there is a hearing in place for October where everything will be revealed and decided,” Hearn said.

“They have got to clear his name. He can fight tomorrow, but it is no good if there is any cloud over him. That’s what we need to make sure that he is cleared.

“I believe in him, but I at the same time, I feel it has to be out there in the open before his next fight.”

Any delay in Whyte’s case could bring matters to a head, however. Sky already have two Box Offices dates announced for the last part of this year – Josh Taylor-Regis Prograis on October 26 and Andy Ruiz Jr-Anthony Joshua for December 7 – making it very unlikely that another featuring Whyte could be squeezed in this year even if he is cleared, although it is unlikely that one would be considered with the case hanging over him.

That could leave the way for Whyte to box in the United States on one of Hearn’s DAZN shows if he wants to stay active as he awaits a WBC title shot next year.

[QUOTE=MDPopescu;20050108]I thought that VADA was formally responsible with that clean boxing program with WBC... or not?[/QUOTE] Yes, they are, but Whyte passed all the VADA tests. UKAD have their own separate testing programs for UK fighters and fights staged in…

[QUOTE=Toffee;20050253]What will the B sample tell you? Why is it worse that they may not have tested it? The whole B sample thing is media (especially this site) fun and games. My understanding is that [B]Whyte accepted the test result…

[QUOTE=Bronx2245;20050331]Exactly! If they're part of the WBC Clean Boxing Program, and the WBC sanctioned the fight, I think [B]they should make a statement telling us how many times they tested each fighter, and when![/B] I think J-Rocks demands insinuates that…

[QUOTE=MDPopescu;20050108]I thought that VADA was formally responsible with that clean boxing program with WBC... or not?[/QUOTE]Exactly! If they're part of the WBC Clean Boxing Program, and the WBC sanctioned the fight, I think they should make a statement telling us…