Multiple sources have confirmed that an "A" sample taken from Dillian Whyte tested positive for one or more banned substances prior to Whyte's July 20 fight in London against Oscar Rivas. Although Whyte is in the World Boxing Council Clean Boxing Program which is administered by the Voluntary Anti-Doping Association (VADA), the test in question was administered by UK Anti-Doping (UKAD).

The positive test result is believed to have come back on July 17. A knowledgeable source says that it was reported to the Whyte camp (including promoter Matchroom Boxing) and the British Boxing Board of Control by UKAD prior to Whyte-Rivas. However, the BBBC allowed the fight to proceed as scheduled.

Under rules in place in the United Kingdom, Whyte has a right of appeal. UKAD takes the position that, until the adjudication process is over and due process is complete, there has not been a finding that a fighter is in breach of its PED protocols and no sanctions can be put in place by the British Boxing Board of Control. 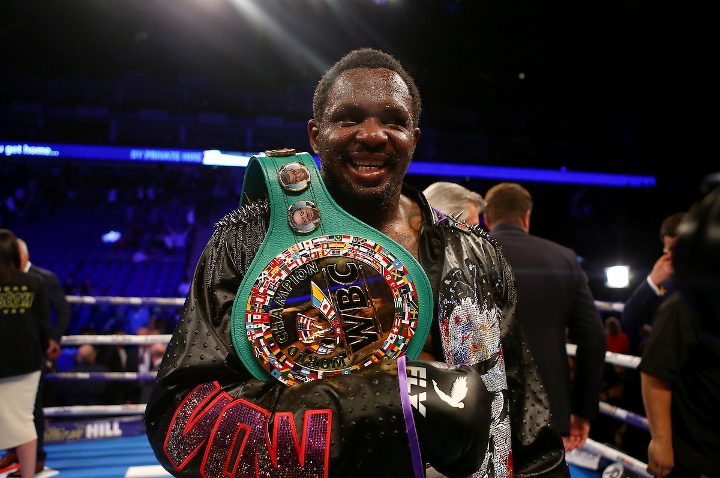 The adjudication process often begins with the testing of a fighter's "B" sample, which can generally be done in 24 to 48 hours. But it often drags on for more than a year. The National Anti-Doping Panel (NADP), an independent entity, is responsible for the final adjudication of PED disputes.

Whyte was previously suspended from competition for two years after testing positive for Methylhexaneamine following his fourth-round knockout of Sandor Balogh on October 13, 2012.

Whyte-Rivas was for the World Boxing Council "interim" world heavyweight title. Whyte weighed in for the fight at an unusually heavy 259 pounds and was knocked down in the ninth round but won a 115-112, 115-112, 116-111 decision.

Under VADA protocols, the positive test result would have been reported to the World Boxing Council and Rivas camp. That appears to have not been the case in this instance with UKAD.

By virtue of his win, Whyte became the "mandatory" challenger for Deontay Wilder's WBC heavyweight crown. In all likelihood, the WBC would have withdrawn its sanction of Whyte-Rivas had it been aware of the positive test result prior to the fight.

It has been widely speculated that the WBC will elevate Wilder to "franchise champion" status, thus eliminating the mandatory requirement that he fight Whyte. This latest development might further complicate Whyte's path to a fight against Wilder.

Thomas Hauser's email address is thomashauserwriter@gmail.com. His next book – A Dangerous Journey: Another Year Inside Boxing  – will be published later this year by the University of Arkansas Press. In 2004, the Boxing Writers Association of America honored Hauser with the Nat Fleischer Award for career excellence in boxing journalism.

[QUOTE=BoxngLove;19968983]They swept this one under the rug so they would not have to refund all the tickets.[/QUOTE]Hmmm. I wonder if some creative attorney could file a class action lawsuit against Matchroom for fraud? The company held a fight at which…

this thing is being swept under the run along with epstien, bogus news is coming

[QUOTE=SchoolTheseCats;19931607]Being cleared doesn’t mean he didn’t fail a test if his test came back clean Hearn would of started that in tweet but didn’t tried to word it carefully[/QUOTE] Exactly. Anyone who competes in sports that are marred by PEDs…

This is now being swept under the carpet. Don't be surprised to see UKAD come out with their tails tucked, saying they made a mistake. Crooked! Hearn's lawyers have also gagged most of the media. Try to find the original…

Quit trying to be American lil boy your British be proud.