The WBC interim heavyweight champion is due to defend his title next month and has now revealed that he won’t have Tibbs in his corner.

Whyte, who is the mandatory challenger to WBC world champion Tyson Fury, is set to face Alexander Povetkin on August 22. 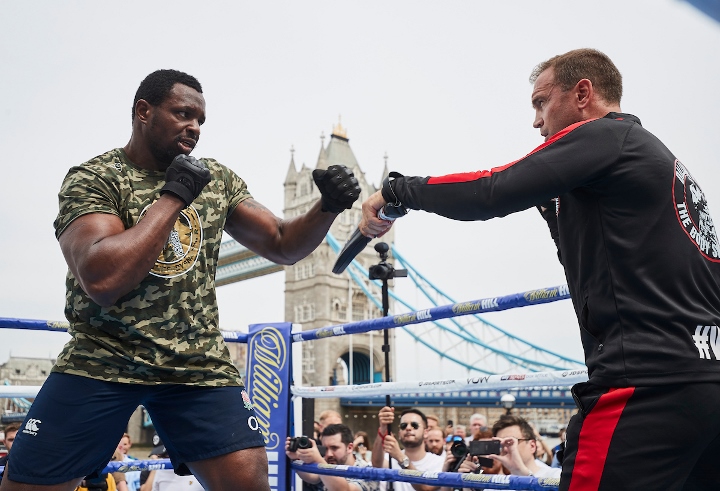 The fight, at Matchroom Boxing’s headquarters in Brentwood, Essex, will be the final outing of 20 across four ‘Fight Camp’ fight nights and will be broadcast exclusively live in the UK on Sky Sports Box Office.

‘The Body Snatcher’ has worked with Tibbs for the last four years on his rise towards a world heavyweight title fight –– something that he has still yet to achieve –– but announced an amicable split after relocating his training camp to Portugal.

"Just to let everyone know Mark Tibbs and I are no longer working together as boxer and trainer,” Whyte wrote on social media on Wednesday.

"I'm training in Portugal and Mark has a young family and his own new gym in the UK. It means it just hasn't worked out in the way we had both hoped.

"Mark came into my team four years ago and has helped turn me into the world class boxer that I am today. Mark is a great trainer and I will always be grateful to him and his Dad [Jimmy] for all they have done.”

It was also revealed that Richard Riakporhe, the British cruiserweight champion who is managed by Whyte, has parted ways with Tibbs.

Amanda Serrano had been set to be in the opposite corner, but the former seven-weight world champion has yet to agree to the fight completely and Taylor’s promoter Eddie Hearn is now targeting a rematch between Taylor and Delfine Persoon for the date.

Persoon was controversially outpointed by Taylor at Madison Square Garden in New York last June and the return is high on the hit list should Serrano not end up fighting the Bray lady.

Martin Bakole, Whyte’s fellow heavyweight, will meet Russia’s Sergey Kuzmin on the card, while there is also a rescheduled clash between Luther Klay and Chris Kongo on the bill for the former’s WBO Global welterweight title.

[QUOTE=Dasmius Shinobi;20650493]I am going to get my chances to bet to Povetkin, now there is more of a chance he win against Dillian White now. This is the time for Povetkin to shine again.:boxing:[/QUOTE] NOt a bad bet considering Shyte…

I am going to get my chances to bet to Povetkin, now there is more of a chance he win against Dillian White now. This is the time for Povetkin to shine again.:boxing:

[QUOTE=Kannabis Kid;20648571]Wouldn't doubt it lol everyone ****ting on Jarrell Miller but giving Whyte an exemption is a hypocrite they are both juiceheads.[/QUOTE] Dillian has employed all the nutritionists that used to work for David Haye. That should tell you something…

Whyte didn’t get a pay day for long time now, his pockets are empty Tibbs cost too much, it won’t surprise me if he get cought with ped’s a bit later bc of no good medical staff 😂😂😂

[QUOTE=REDEEMER;20648624]He’s not by families he’s only subject to train at facilities and either a hotel and or home residents,fighters in camps are restricted to go places and are tested with the the required rules of showing someone negative. I’m not…