Diego de la Hoya’s last two attempts at a showcase fight in Mexico have resulted in no fight at all and—once finally in the ring—a No-Contest.

Given his recent unlucky run, it’s perhaps wise to advance him to the title stage as quickly as possible.

The unbeaten contender from Mexicali, Mexico will enter his first title fight of sorts, as he will vie for the World Boxing Association (WBA) “Interim” featherweight title. The event will take place July 13 at Dignity Health Sports Park in Carson, Calif., as confirmed by his manager and uncle Joel de la Hoya, Jr. 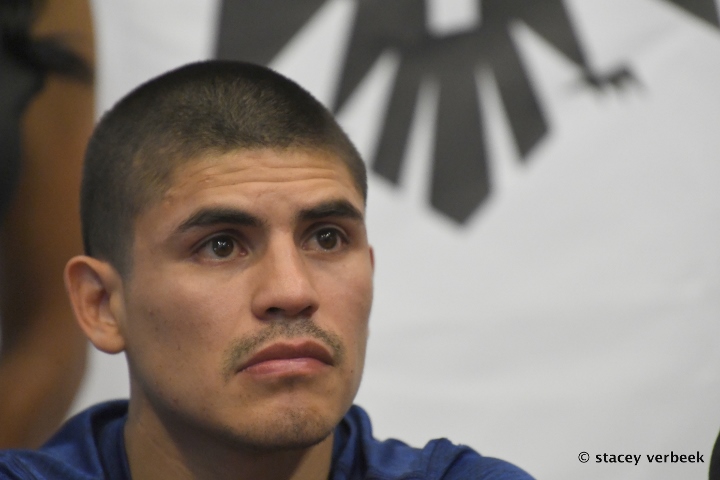 De la Hoya will likely face California’s Ronny Rios, although the bout is pending approval from the WBA. The bout, once official, will serve in supporting capacity to the 122-pound title consolidation bout between unbeaten WBC titlist Rey Vargas and interim beltholder Tomoki Kameda.

De la Hoya (21-0, 10KOs)—a cousin of Hall of Fame former six-division titlist Oscar de la Hoya, and now the young contender’s promoter—moved up to featherweight earlier this year after physically outgrowing the super bantamweight division. As much was evident in his being hospitalized due to dehydration after missing weight for a canceled showcase bout in his Mexicali hometown last November.

With the weigh-in fallout also came his forfeiting his mandatory contender status as his very next fight was due to be for a 122-pound title.

Instead, the rising contender—who turns 25 in August—started anew at featherweight. His first fight at the new weight versus countryman Enrique Bernache ended in a No-Contest when a cut ended their fight inside of two rounds this past April in Monterrey, Mexico.

The purpose of the bout was to get him back in the ring, as de la Hoya hadn’t fought since a 7th round knockout of Jose Salgado last June.

Now he will inch closer towards realizing his dream of becoming a major titlist. A win on July 13 will put him in line for a crack either at “Super” champion Leo Santa Cruz, or recently crowned “Regular” titlist Xu Can, who returns to his native China for a title defense versus Japan’s Shun Kobo this Sunday.

Can is currently co-promoted by Golden Boy Promotions, which should make it relatively simple to make a title fight with de la Hoya provided he wins on Sunday—and also provided that de la Hoya can finally make it through a fight not just unbeaten but also unscathed.

I am 98.9 percent sure Diegeedough is a bum. The remaining 1.1? It is in his blood, he may bloom lol

[QUOTE=anonymous2.0;19765872]Must be nice to be related to a major promoter and leapfrog everyone else for an interim belt[/QUOTE] Diego wasted 2 years of his career and flushed a title shot down the drain at 122. Honestly if his cousin wasn't…

Diego can fight. His problem is weight. He beat Randy Caballero who was a undefeated former world champ at the time and hasn't fought since Diego dominated him 2 years ago. Diego worked his way to having a world title…

Total joke that this is for any ranking at all, but to be fair Ronny Rios is a pretty tough guy. He's slow but he can bang, he definitely has a shot at the upset here. DLH's combinations look nice,…

Promoters have to love the WBA so many world titles [QUOTE=lizard_man;19766307]Interim Regular Super Smh[/QUOTE] You forgot WBA Gold is in the books now [url]https://www.boxingscene.com/rankings[/url]