Lou DiBella is very high on his middleweight prospect Sergiy Derevyanchenko. And soon he may get to see just how high Derevyanchenko can go.

“I’m trying to orchestrate Sergiy Derevyanchenko into an opportunity in the middleweight division,” the promoter said.

First comes a title eliminator against Sam Soliman on July 21 in a “Premier Boxing Champions” broadcast on NBC. Soliman, a 42-year-old former titleholder, is coming off a unanimous decision loss to Jermain Taylor in 2014 and a split decision loss to Dominic Wade last June. He is 44-13 with 18 KOs. 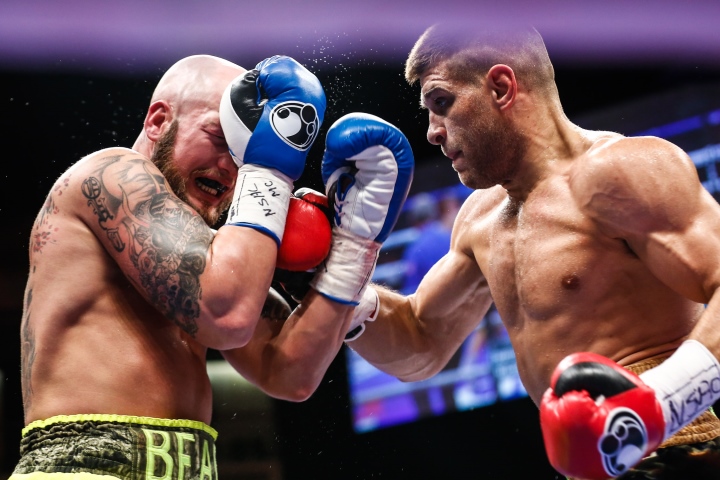 “In a perfect world, we would honestly prefer to fight somebody that was younger and a friendlier style,” DiBella said. “But that’s what we have to do to get Sergiy into the position to get a title shot.”

The bout is an IBF eliminator. The belt is currently one of three major titles held by Gennady Golovkin. Although Derevyanchenko is currently just 8-0 with 6 KOs as a pro, DiBella sees the fighter beating Soliman and having just one more bout before being ready to challenge for a world title.

“I think he’s ready. His amateur pedigree is absurd,” DiBella said. “He had the kind of amateur record that Golovkin had — another one of the guys with the 300 wins and a handful of losses. He’s a technician. His style is a little bit different than a Golovkin. His power comes more from his technical perfection. Sergiy is more the kind of guy that’s going to hurt you after he breaks you down. Sergiy is the guy out there that might give Golovkin the toughest fight of everybody, or Danny Jacobs. The thing is, Sergiy’s trainers are the same as Danny’s, so I don’t see that fight in the immediate future.”

[QUOTE=John Locke;16823304]My man Castano beat the **** out Derevyanchenko in the ams [/QUOTE] Man what a shame that Castaño is not fighting more often... He needs exposure, he's world class talent.

[QUOTE=CaneloMaidana;16822983]He's 30 and already stepped into a ring over 300 times. Golovkin ducks Eastern Euros for a reason.[/QUOTE] Do us a favor and pull the trigger [IMG]http://pakistancriminalrecords.com/wp-content/uploads/2012/09/Three-people-commit-suicide.jpg[/IMG]

It's noticeable how many boxers at junior middleweight and middleweight that have been saying they will fight Golovkin over the last 6 to 9 months. It would be curious to know how many of those media comments came after sending…

My man Castano beat the **** out Derevyanchenko in the ams

hhmmm according to derevyancheko's weight... he's only made 160 ONCE!