DiBella: Derevyanchenko Will Emerge As A Star Saturday Night

Lou DiBella realizes even some hardcore boxing fans aren’t all that familiar with Sergiy Derevyanchenko.

The unbeaten, unknown middleweight contender’s promoter blames some of Derevyanchenko’s anonymity in the United States on himself and some on boxing politics that forced the IBF’s mandatory challenger to wait until Saturday night for his title shot. DiBella still is certain Derevyanchenko will emerge from his career-defining fight against Daniel Jacobs as a much more known, proven commodity than when he enters the ring inside The Theater at Madison Square Garden. 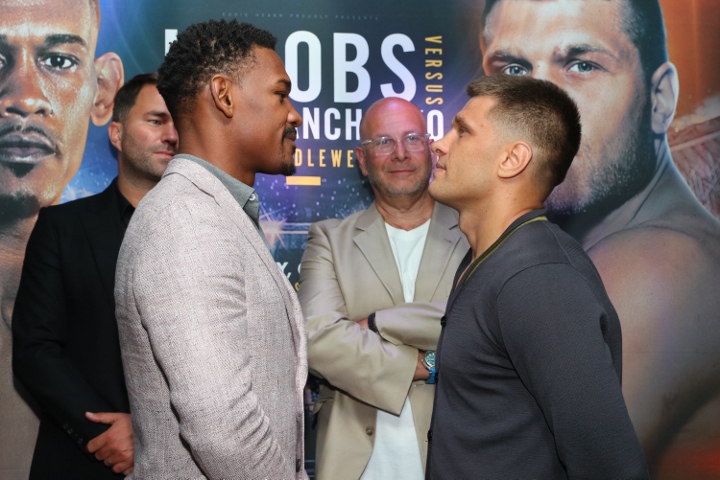 “And I believe that Sergiy Derevyanchenko is gonna emerge Saturday night as a star. And I think that’s been his destiny for a long time. It’s coming against someone he knows very well, but as Danny pointed out earlier, there’s a big difference between sparring and getting in there when everything is on the line.”

Derevyanchenko didn’t make his pro debut until he was 28. He won 390 fights during a distinguished amateur career that included an appearance at the 2008 Summer Olympics in Beijing.

The 32-year-old contender has fought infrequently (12-0, 10 KOs) since making his debut in July 2014, but he has been the IBF’s mandatory challenger for its 160-pound championship since stopping the Bahamas’ Tureano Johnson (20-2, 14 KOs) in the 12th round of their August 2017 elimination match in Miami, Oklahoma.

Derevyanchenko last fought March 3, when he stopped American journeyman Dashon Johnson (22-23-3, 7 KOs) after the sixth round at Barclays Center in Brooklyn.

“He would’ve preferred to have fought more often,” DiBella said. “We had to go through the politics of boxing to get him the opportunity to fight against Tureano Johnson for the mandatory position. And then, when you’re sitting in the mandatory position, you have to be available. And available means inactive until that opportunity presents itself. Because if you schedule a fight, particularly if you’re a guy like Sergiy, who’s an excellent fighter, a dangerous fighter and a guy capable of beating anybody, you can’t risk missing your opportunity.

“I know he would’ve preferred to fight more often. I’m sure he’s gonna tell you that right now. And frankly, we should’ve been able to keep him more busy. And some of that’s on me, but it’s really on the television’s willingness to buy a guy that doesn’t have big name recognition, and the ability to get optional opponents who will fight a monster like Sergiy when they don’t have to.”

Jacob's stops him in 7

GGG took Jacobs prime away in the beating he gave him two years ago. DChenko is going to finish off Jacobs who could have been a great fighter if he didn't take on GGG while GGG was on the tail…

I think Jacobs has gone a little bit down hill since GGG. He could lose this one

Tough to see two guys that used to train together go at it should be a good fight. I think he will push Danny and he will rely on the experience of fighting GGG and come out victorious

Looking forward to this one. I like both guys and I'm interested in seeing how Derev looks.