DiBella Defends Wilder-Arreola "PBC On FOX" As a Ratings Success

The official promoter of the “PBC on FOX” card Saturday night has watched media members and fans criticize the show’s viewership figures all week. The former HBO Sports executive has been perplexed because, according to The Nielsen Company, the telecast averaged 2.54 million viewers throughout the Deontay Wilder-Chris Arreola main event from Legacy Arena in Birmingham, Alabama.

“The only other heavyweight title fight that’s done that many people was when Wilder fought on free TV the last time,” DiBella told BoxingScene.com. “It did a similar number. No Klitschko fight over the last decade has had that many people watch it. Even when Lewis fought Tyson, and it was enormous, less than two million homes saw it. So by what standards are you guys judging?”

Lennox Lewis’ eighth-round knockout of Mike Tyson in June 2002 drew 1.97 million pay-per-view buys, the second-most in heavyweight history, behind only the Evander Holyfield-Tyson rematch in June 1997 (1.99 million). It is difficult to quantify how many people actually watched the Lewis-Tyson fight live because buys don’t account for the amount of viewers who actually watched a fight in a given bar, home or restaurant.

Heavyweight title fights involving former champion Wladimir Klitschko and his older brother, retired ex-champ Vitali Klitschko, most often were broadcast by HBO in the United States over the past 16 years. Those fights were available in a lot less homes nationwide than the free-TV exposure afforded the Wilder-Arreola fight, which Wilder won by technical knockout despite suffering a torn biceps muscle and a fractured hand.

DiBella stressed that the “PBC On FOX” ratings must be placed in the proper context when assessing how it performed. Prime-time television ratings regularly drop during summer months, DiBella said, and it’s always a challenge to generate strong ratings on Saturday nights.

“People are sitting there writing articles and Tweets are going up about the disappointing numbers on FOX,” DiBella continued. “That’s horsesh*t. Why would be disappointed by over 2½ million homes watching a heavyweight title fight, with an American heavyweight champion? When [Gennady] Golovkin fought on pay-per-view [against David Lemieux on October 17], and this is no criticism of Golovkin, a little bit more than 100,000 homes saw that fight.

“This Saturday night, there’s a very good fight [Terence Crawford versus Viktor Postol] going on [pay-per-view]. I’m rooting for [promoter] Bob [Arum] to do very well and for Top Rank to do well with it. I really am. I’m hoping it gets a big audience. But if they do 100,000 homes, they’re gonna be pleased. And there are people out there trying to twist the heavyweight title fight being seen in 2½ million homes as some kind of disappointment? As the promoter of that fight, I’m not disappointed. I think that’s good for boxing. I think that’s great for Deontay Wilder.” 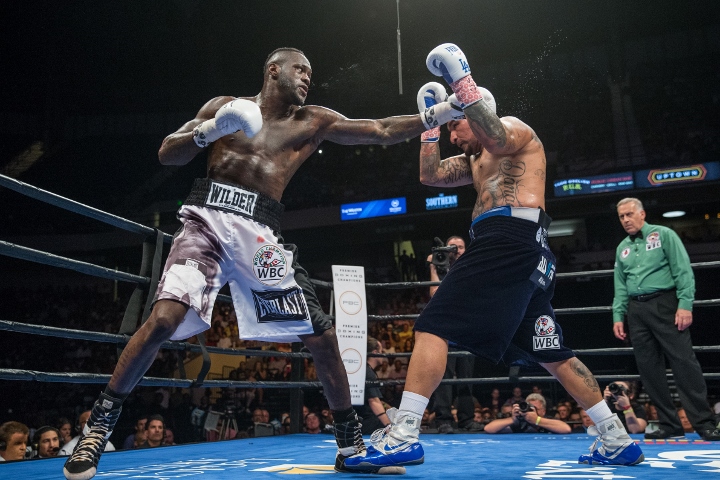 The telecast featuring Wilder’s previous national television appearance, a ninth-round stoppage of France’s Johann Duhaupas, averaged 2.2 million viewers on NBC on September 26 and peaked at roughly 3 million viewers that night from Birmingham. Thus the Arreola fight, an optional title defense Wilder was heavily favored to win, out-performed his last free-TV appearance, despite that it took place during a summer month.

Wilder-Arreola was scheduled only after Wilder’s mandatory WBC title defense against Russia’s Alexander Povetkin, scheduled for May 21 in Moscow, was postponed indefinitely because Povetkin tested positive for a performance-enhancing drug.

“I want to put a different slant on what I’ve been reading about the FOX show,” DiBella said. “And I saw a lot of tweets popping up, ‘Oh, PBC continues to disappoint.’ I can tell you I don’t believe FOX was disappointed, PBC was not disappointed, and I can tell you that as Deontay’s promoter, I certainly wasn’t disappointed. Over 2½ million homes, somewhere well in excess probably of 10 million people, saw an American heavyweight champion put on a gutsy, courageous performance on free television. That’s good for boxing. And those are not Lou DiBella numbers. Those are Nielsen numbers.”

“That’s not a failure,” DiBella concluded. “That would be a really, really skewed way of interpreting numbers and viewing something. And even the [welterweight] fight with Felix Diaz and Sammy Vasquez, which was a very good fight, that did not peak at the number Wilder-Arreola did. But when was the last time that many households saw any Golovkin or Kovalev fight on premium cable? They haven’t.

“And that’s more people than have seen an American heavyweight champion fight in God knows how many years. … I’m not sitting here trying to crap on anybody else’s product. I’m just saying that I don’t view that as a failure as the promoter. I view that as a good night for boxing.”

[QUOTE=vitali1999;16896424]I don't care if you leave or stay. There are hundreds of guys on here like you. Kill one roach, another one shows up[/QUOTE] I'm other words, you have nothing to back up your blatant lie. :lol1:

[QUOTE=vitali1999;16893914]You're right. I believe you called Wilder the greatest champion ever :rofl::rofl::rofl[/QUOTE] So you're not going to take me up on my bet? All you need is a link and you could be the guy to make me leave this…

[QUOTE=ElBossHogg;16891152]why is dibella even speaking? he just a damn proxy.[/QUOTE] Seriously, its hilarious watching him pump his chest out for Haymon. He gets paid a flat fee to "promote" some of haymons fights. And once in awhile he gets to…