Deontay Wilder: Joshua Did NOT Want To Step Up - Fury Did!

As BoxingScene.com reported on Friday, Tyson Fury's father had to be restrained after Deontay Wilder crashed the weigh-in for Fury's fight against Francesco Pianeta.

WBC heavyweight champion Wilder (40-0) is in Belfast to witness the bout with a view to taking on the former IBF, IBO, WBA and WBO king, who only returned to the sport after a 2 1/2-year absence in June, following a breakdown in talks with Anthony Joshua.

Wilder appeared after Fury tipped the scales at 258 pounds — more than 18 pounds lighter than he was at for his victory June 9 over Sefer Seferi in Manchester, England — and got into a shouting match with Fury's father, John, who had to be held back on the stage. 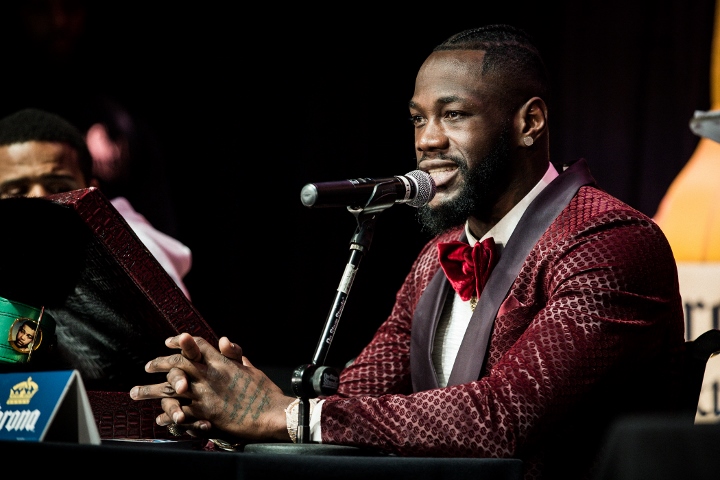 Fury (26-0) and Wilder then came face to face in the lobby of Europa Hotel in Belfast, shouting at one another in the center of a huddle surrounded by reporters.

"I'm looking very forward to watching Tyson fight and seeing what he's gonna do," Wilder told BT Sport. "He'd better take this guy very seriously. I know there's a big fight coming up between him and I, but this is the first and very important step for him. He must execute, he must complete the task and get the job done. If not, it all goes in vain."

Pianeta (35-4-1) weighed in at just under 227 pounds and asked Fury to pose for a selfie on stage following their face-off.

Wilder hopes Fury is focused on the job at hand.

“He better take this guy very seriously, you know. I know there’s a big fight coming up between him and I, but this is the first step. This is a very important step for him, he must execute and complete the task and get the job done. If not, then it all goes in vain! At the same time, we’re here; we’re going to enjoy ourselves," Wilder said.

“This is what it’s all about; when the best want to fight the best, the best will fight. Me and Fury, it didn’t take long for us – just a phone call between me and him. He said he wanted to fight, I said ‘you know what, it’s about that time.’

“When two fighters want to fight, the fight will happen – it’s plain and simple. Anthony didn’t want to step up, Tyson Fury did. Tyson Fury is still Lineal champion, he is still unified champion. Belts are just like having a car; Joshua may be driving the car, but he don’t own the title.”

[QUOTE=genrick;19030079]These Wilderites keep making the date the issue. Because it's very convenient eh? Please tattoo it in your foreheads. The rematch clause was the one Wilder and team made a big deal of, not the date. Finkel admitted already they…

[QUOTE=Pennsauken1;19029781]AJuice AKA the Champion of Mandatories[/QUOTE] Serious question: How old ARE you?

[QUOTE=Patsfan bri;19029669]I’m going to try and be neutral here but let me reminded you Aj asked for 50 million and wouldn’t accept the offer that he asked for . Why ? Team AJ thought it was all a stunt and…

[QUOTE=nick_viking;19029472]I caught a few interviews with Wilder yesterday, he came across really well, can see fans in the U.K. warming to him. But if Fury is in shape then I believe he might be in for a rude awakening come…

[QUOTE=The Madison;19029367]All these.guys talk about is Joshua. It's getting embarrassing now[/QUOTE] It’s true, but let’s face it, these aren’t unprovoked statements. Journos know how to get a sound bite by asking Fury/Wilder about AJ and no-one loves a sound bite…