Wilder believes Stiverne took too much punishment during their one-sided 12-rounder in January 2015, when Wilder won the WBC heavyweight title from him in Las Vegas. Nevertheless, Stiverne remains the only opponent Wilder hasn’t knocked out since he turned pro nine years ago.

The knockout artist from Tuscaloosa, Alabama, plans to rectify that Saturday night in Brooklyn, New York. That’s where Wilder and Stiverne will engage in a mandatory rematch at Barclays Center (Showtime; 9 p.m. ET/6 p.m. PT). 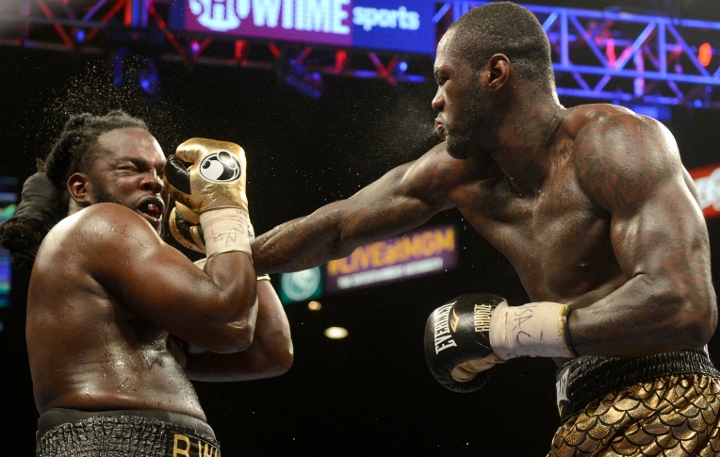 “I thought the first Stiverne fight should have been stopped,” Wilder said during an open workout Wednesday in Brooklyn. “He had knots all over his faced and was concussed. I’m not trying to leave any doubt this time around.”

Stiverne (25-2-1, 21 KOs) had accepted a six-figure fee to step aside and allow Wilder (38-0, 37 KOs) to make an optional defense against Ortiz. He was training to face Dominic Breazeale (18-1, 16 KOs) on the Wilder-Ortiz undercard when he was elevated into the main event last month.

“Stiverne is going to see me come to Barclays Center and finish the job on Saturday,” Wilder said. “He survived the first time. He’s the only one to survive on their feet. I will finish the job this time.”

The 39-year-old Stiverne says he was “sick” when Wilder defeated him by unanimous decision (120-107, 119-108, 118-109). Wilder, 32, has chastised Stiverne for making excuses for his lopsided loss, but plans to eliminate any doubt about who’s the better fighter Saturday night.

“He knows what happened,” Wilder said. “I beat him 12 rounds in a row. I think this fight will be even easier for me. He hasn’t improved since we last fought, but I’m going to show him a whole new Deontay Wilder. This is the end of Bermane Stiverne’s career right here.”

Wilder mouth runs way too up, he should learn how to close it a little and let his fist do the talk in the ring just like other fighters.

Everyone should feel bad Stiverne, can't blame nobody but AJ for ducking Wilder.

End Stiverne's career?? What career??? Lol Nah, should be a good 3 round sparring session Saturday evening then I'll watch some college footbaaaaall!!! Lol

The other title holders didn't put up fantastic performances in their last defences so this is his chance to set a benchmark. Take it.