Deontay Wilder: I Want To Beat Fury's Ass, Then Knock Him Out

SANTA MONICA, California—From walking into the arena, to warming up in the dressing room, to eventually raising his arms as the victor as he’s successfully done forty times before, undefeated Alabaman Deontay Wilder says he visualizes a step-by-step scenario of his actions each time he walks into the squared circle.

The 33-year-old boxer will once again enter a meditative and visualized state of mind for the most important fight of his career against Tyson Fury on December 1—only this time as a pay per view attraction at the Staples Center in Los Angeles.

“I’m in tact mentally, emotionally and physically—I’m transforming into a killer,” Wilder said after a workout with trainer Jay Deas at the Churchill Boxing Club on Monday. 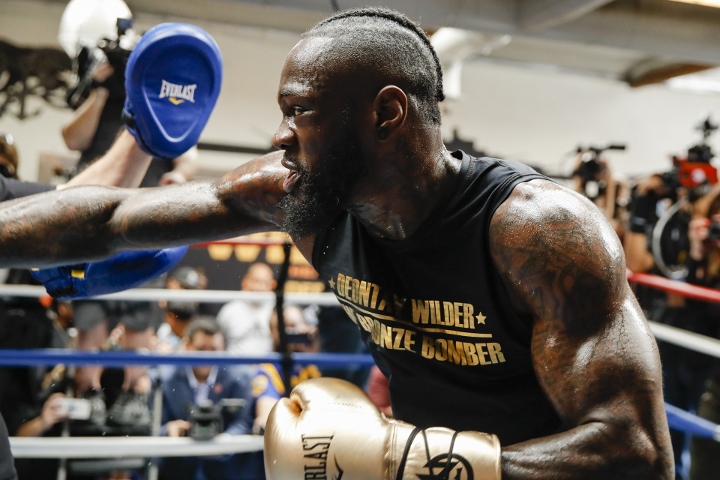 To beat the combats of what can oftentimes be a strenuous promotional process for PPV events—paired along with the potential pitfalls of the most dangerous opponent he’s faced to date—Wilder is tapping into the zen that he’s depended on since he was a bronze-winning U.S. Olympian over a decade ago to prepare for the biggest moment of his professional career.

“When the [distractions] and pressure get too far, I know how to fall back,” he said. “I definitely know how big this fight is, and how much that means to fans and the people around me. I feed off of their energy as well. I’m going to make sure the fight lives up to its hype.”

The promotional burden has somewhat been eased for Wilder because he has a loquacious dancing partner in Fury who’s eagerly waiting to have a word with a working microphone. But the verbal jabs that Fury has delivered in flurries thus far have not bothered Wilder, the owner of 39 knockouts confessed.

Wilder said he’s been training for the British lineal heavyweight champion the same way he has for every other fighter before him, only this time, with newfound obligations.

“We can have a million people in the room and I can just zone into myself and my thoughts,” Wilder said, explaining his approach to tranquility and focus. “But I want to beat [Fury’s] ass, and then knock him out. This is my time. This is my introduction to the world as heavyweight champion of the world—the baddest man on the planet.”

[QUOTE=1hourRun;19250800] [I]I laughed when Tyson Fury told Showtime Sports that hes the HW 'Rolls-Royce'! 'Slick' he said! Most of Fury's fans are a bunch of casuals nitwits that only seen one fight in this bums whole career -- yeah you…

Time to announce yourself to the world.... after 40 fights including several world title defences....

Who ever wins respect, at least none of them are known cowards like that bum who's gonna fight bigger bums in pulev :rofl: