Given recent developments, there stood a chance that Denis Lebedev would celebrate his 40th birthday before seeing a boxing ring.

His latest statement all but confirms it.

The multi-term cruiserweight titlist has officially announced his retirement on Thursday, opting to call it a career after watching back-to-back fights fall apart this year.

“It's time to part with a great sport,” Lebedev announced through his verified social media account. “s a real man, husband and father, I have to concentrate on my large family and… pay as much attention as possible to those closest to me.” 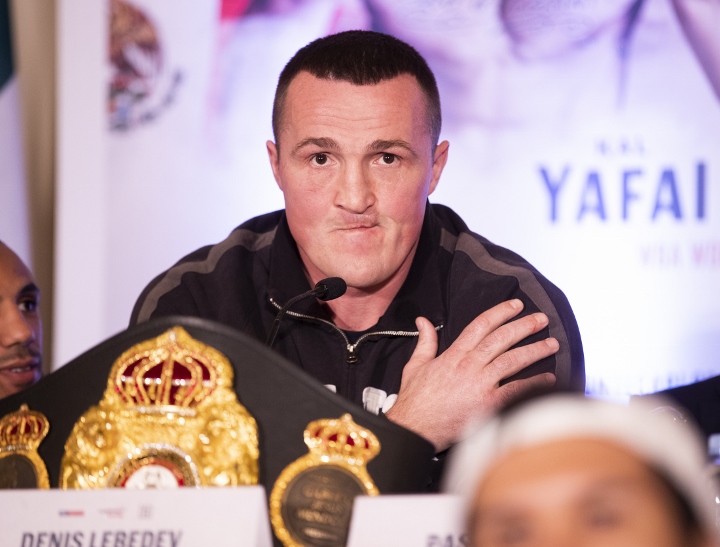 Lebedev (32-2, 23KOs) sees a bizarre 2019 campaign begin and end without a single fight, yet managing to resurface as a cruiserweight titlist. The Russian southpaw was named as the mandatory challenger to former World cruiserweight king and 2018 Fighter of the Year Aleksandr Usyk, with such fight ordered by the World Boxing Association (WBA).

There remained the strong likelihood that such a fight would never materialize, as Usyk had already announced his intention to campaign as a heavyweight. As such, the unbeaten Ukrainian vacated the first of his slew of cruiserweight titles, with Lebedev reinserted as WBA “Super” cruiserweight titlist without having to fight for such honor.

The distinction came from his previous reign, having held some portion of the WBA title from 2012 until last February, when injuries and inactivity prompted the sanctioning body to name him “Champion in Recess.” The label allows such claimants to enforce a title shot at their leisure upon their ring return, which Lebedev did after a 12-round win over Mike Wilson last November—which will serve as the last official fight of his 18-year career.

In all, his two title reigns have come under bizarre circumstances. Lebedev’s first swing at a cruiserweight crown resulted in a hard-fought 12-round loss to Marco Huck in 2010. The first loss of his career was followed by a brief legends tour, battering faded versions of Roy Jones Jr. and James Toney in back-to-back wins in 2011.

The latter netted Lebedev an interim portion of the title, which was upgraded following a Dec. 2012 2nd round knockout of Santander Silgado. His reign was short lived, or so suggested his May 2013 stoppage loss to Guillermo Jones. The verdict was marred in controversy, as Jones tested positive for a banned substance—a pattern which he would repeat ahead of their planned rematch in 2014 which was cancelled at the 11th hour.

Lebedev was reinstated as champion, although it would take years to scrub the loss from his record as it was eventually changed to a No-Contest. Five successful defenses would follow, including a 2nd round knockout of Victor Ramirez in their May 2016 unification clash. The win was key, as he would only put one of his two titles—the International Boxing Federation (IBF) strap—on the line in a Dec. 2016 loss to then-unbeaten Murat Gassiev.

Just one more title fight win would follow, a 12-round decision over Mark Flanagan in July 2017 before injuries slowed his career to a crawl.

A comeback tour came about last September, scoring two wins before pushing for an Usyk fight that never saw the light of day. Nor would an ordered title consolidation clash with “Regular” title claimant Arsen Goulamirian, a fight which appeared to be on course as the two avoided a WBA purse bid hearing, only for the event to fall apart earlier this month.

It was enough for Lebedev to move on to his next adventure, whatever that may be.

“Life does not stand still, and together with you we will do great things and small good deeds for our country, for our youth,” promises Lebedev. “After all, this is also my family. And we will succeed!”