Negotiations for a fight between Demetrius Andrade and Charles Hatley are ongoing, according to Andrade’s co-promoter, Joe DeGuardia of Star Boxing.

DeGuardia, who promotes the former 154-pound titleholder alongside Artie Pelullo of Banner Promotions, is hoping Andrade-Hatley will happen before the end of April.
“We’re just about finalizing the terms of the deal with Demetrius and the co-promoter, or other promoter of Hatley, and also Hatley himself,” DeGuardia said. 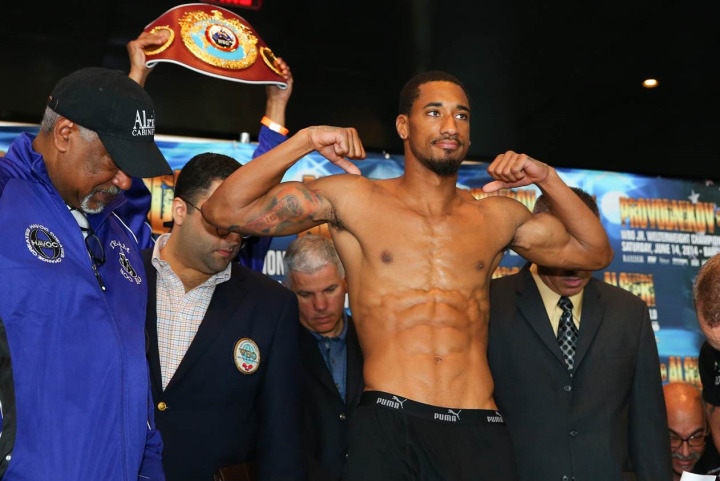 Andrade picked up a vacant world title with a November 2013 split decision over Vanes Martirosyan and defended it once, clobbering Brian Rose for seven rounds in June 2014. But then Andrade sat on the sideline for 16 months, opting against a fight with Jermell Charlo, battling with his promoters, and getting stripped of his world title.

He finally came back last October, needing less than four minutes to dispatch Dario Pucheta. That brought Andrade’s record to 22-0 with 15 KOs.

Hatley is 26-1-1 with 18 KOs. He was stopped in one round by Lanardo Tyner back in 2012, but since then has rolled off nine straight victories, including an 11th-round stoppage of Anthony Mundine this past November.

“I think he’s a good fighter. He’s rated high. He had a nice win against Mundine down in Australia,” DeGuardia said. “To me, I think Demetrius is one of the best in the world. I know Demetrius beat him in the amateurs. We’ll see if it carries over to the pros.”

[QUOTE=285Kid;16502501]What going on at 154 & the WBC? Where are all the fights for belt?[/QUOTE] Isnt this the wbc tournament, does andrade fight hatley, then charlo fights someone whose name ive forgotten for the belt and fights andrade after as…

Andrade is good enough to beat everyone in the division. The guy can't sign with Haymon soon enough.

[QUOTE=285Kid;16502501]What going on at 154 & the WBC? Where are all the fights for belt?[/QUOTE] The matchups have already been laid out (Andrade-Hatley, Charlo-Jackson, Smith-Cota); at this point, is simply down to having all the fights actually put on fight…

Good to see Andrade at least fighting, he needs to get back fighting top guys because he has that talent.